CUNNINGHAM INSISTS BAILEY IS FAKING; GUARANTEES ALEXANDER WILL "GET RID OF" HIM IN OCTOBER 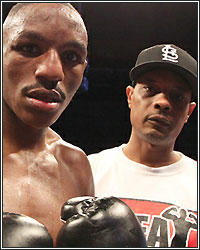 "Hey Randall, if you were in the gym training instead of hangin' out, getting high with your homies, and trickin' off with strippers, you would have been ready to fight on September 8th," stated world-class trainer Kevin Cunningham, who insists that IBF welterweight champion Randall Bailey recently faked a back injury in order to postpone his title defense against Devon Alexander, which was set to take place this Saturday. "You are faking injuries now, but come October, your injuries will be critical," he continued.

Although an official date has yet to be set, the bout will likely be rescheduled for either October 20th or October 27th. Clearly, Cunningham is not pleased about the fact that he and Alexander spent more than 8 weeks in training to get in peak condition, only to find out a week before the bout that they would now be forced to continue training for another 6-7 weeks before the fight finally takes place. It's a fact that has Cunningham even more eager to get Bailey inside the ring to repay him for the inconvenience. "You screwed the network, promoters, and the fans with unprofessional bullshit," Cunningham added. "To the fans, I guarantee, Devon's going to get rid of this piece of shit in October."