SAUL ALVAREZ: "I'M NOT OVERCONFIDENT...I'M GOING TO PREPARED FOR EVERYTHING" 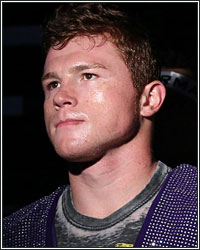 "I've prepared very well. I never, you know, think that any fighter's are going to be an easy fight. So I'm not overconfident and I'm very, very well prepared for this fight....Obviously he's a very good fighter. He's a fighter that knows how to pressure. He's also a fighter that knows how to counterpunch, but I think that I'm going to be prepared for everything. I'll do my best and I'm going to be prepared for the fight," stated WBC jr. middleweight champion Saul "Canelo" Alvarez, who talked about his upcomiing clash this Saturday with Josesito Lopez during a recent conference call. Check out what else he had to say!


De La Hoya: At this moment, I would like to introduce Canelo Alvarez. He hails out of Guadalajara, Jalisco, Mexico. He's the WBC Super Welterweight World Champion. He's been a pro since 2005, and he's coming off his dominant, unanimous decision win over future hall of famer, Sugar Shane Mosley.

He's making his Showtime debut on Mexico's biggest holiday weekend of the year, the Mexican Independence weekend. He has a record of 40-0 with 29 knockouts, Guadalajara, Jalisco, Mexico, Canelo Alvarez.

Canelo: I'm very happy to be with all of you here today and I'm ready for the fight.

Q: We're a week away from the fight. How are you feeling?

Canelo: Very good. I'm very good, you know, just finishing up with training. I'm in Las Vegas now. We're just going over details and fine tuning everything for the fight.

Q: Aside from the obvious problem of two main idols, Mexican idols, competing on the same night and fighting, how do you feel about two Mexican fighters being in the eye of the world, in the boxing world, showcasing both of them as main events in Las Vegas?

Canelo: It's great being Mexican and we're capturing the eye of the world of boxing, showcased in Las Vegas on major cards, I feel very great and I'm honored.

Q: What's your assessment of Josesito as a fighter? Are you over confident because you have a weight advantage?

Canelo: He's a very smart fighter. He's a good fighter, very smart. He's got very, very good combinations so I think he's a very good fighter. And no, I'm never overconfident. I've prepared very well. I never, you know, think that any fighter's are going to be an easy fight. So I'm not overconfident and I'm very, very well prepared for this fight."

Q: You know, your life has changed in the last few months. You're living now in the U.S. You're learning English. How do you feel about the changes in your life at this point?

Canelo: I'm feeling very good. I thank God that everything's going good. It hasn't been much time since the last fight. I've been staying here in the U.S., but I've had a training camp of two and a half months. Everything's going very, very well; all aspects of my life are changing right now, not only in my personal, but obviously in boxing as well. I'm feeling really, really good.

Q: Obviously it's a big honor for you to be fighting on Independence Day, but it's a little bit of Independence Day for you as well. It's your first headline big show in Las Vegas. How do you feel about that?

Canelo: It is a big honor. It's a big honor to be representing my country, Mexico, and to be headlining as well, but you know what? I mean the most important thing for me is to concentrate on this fight. Think about this fight. I'm not thinking about anything else, just this fight and what I have to do.

Canelo: No, not at all. I never think about the knockouts. I go into every fight, do my work, and none of that stuff puts pressure on me at all.

Q: There's a lot of rumors about you possibly fighting Mayweather. A lot of people out here think that maybe the best fight for you first would be Cotto, fighting first. What do you think about that?

Q: The second part to the question there, at this stage of your career, at such a young age, you have reached what is a dream for many boxers out there. And coming into this coming up weekend where you're going to be on Mexican Independence Day, one of the largest days ever, what's your motivation to keep performing at that elite level?

Tickets priced at $400, $300, $150, $50 and $25, not including applicable service charges and taxes, are on sale now and available for purchase. Ticket sales are limited to 10 per person. To charge by phone with a major credit card, call Ticketmaster at (800) 745-3000. Tickets also are available for purchase at www.mgmgrand.com or www.ticketmaster.com.