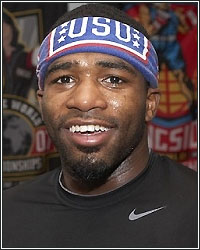 During tonight's broadcast of HBO Boxing After Dark, it was revealed that former super featherweight champion Adrien Broner will indeed be making his lightweight debut when he faces WBC lightweight champion Antonio DeMarco on a televised November 17 HBO World Championship Boxing card. Although representatives from either fighter have yet to confirm the bout, the fact that HBO announced it as one of their upcoming events is an excellent sign that both sides have finalized terms for the bout.