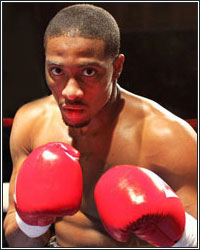 "My message to the division is to just be ready because I'm coming. I'm ready to bust this thing open at 154 pounds. Like I said, I'm gonna get a couple of more wins up under my belt and then we going for a ranking, and then after we get a ranking, we gonna keep climbing. With my promoter, it's steadily a progression. I'm learning and growing and we just moving on to bigger and better things for me," stated up-and-coming jr. middleweight Keandre Leatherwood, who talked about his upcoming fight this weekend, his future plans, and much more. Check it out!

PC: How has training been going for your fight this weekend?

KL: Training has been great. I started off training back at home in Georgia and I came to Cincinnati and started training up here with these guys at the beginning of January, so training has been great. I'm up here with the Broner camp, Adrien Broner. I had a chance to get some sparring in with him. Hank Lundy up here, Robert Easton up here, and there is just a lot of different talent and work up here; Jamel Herring up here, and a guy by the name of William Jackson. It's just a lot of work here and it's been great. After this fight, I'm actually going out to Colorado to train alongside Broner and get ready for my fight on the 16th of February. I have a fight on the 16th as well, so I'm going out there for that and I will definitely be ready for my next opportunity on February 16th as well.

PC: That has to be a comforting situation to not only get in work with guys like Adrien Broner, but to have your next fight lined up already before your fight on Saturday night even takes place.

KL: Oh, it's great, man. You can actually see the progression when you know what's in front of you. I'm blessed enough to be in a position with Boxing 360 right now and my fights are lined up and he's keeping everything in tune and keeping me busy. He's sending me off to train away from home and that allows me to get different experience in and that's great. I have been at a point in my career before where you could ask me when I was fighting again and I would tell you I don't know. That's a bad feeling when you be like, "I don't know when I'm fighting again; hopefully soon." Now I'm in a position where stuff is always lined up and things are always working in my career for me and it's great.

PC: Yeah, because I'm in the south as well and I'm sure Georgia doesn't have the quality of work that you can get elsewhere, so I'm sure that is a very important factor for you.

KL: It's very important because back at home in Georgia, I'm not able to get a lot of competitive sparring, so it's great to be able to venture out and go other places and get different work and see different things. I'm originallymy boxing roots are from Cincinnati. This is where I originally came from. I came up with Adrien and Rau'Shee Warren and Brandon Bennett. When Ricardo Williams was going to the Olympics, I was here; Ron Siler. I came up alongside of a lot of those guys when I was younger and when I was a kid, I trained with them and we went to Nationals together. We slept in the same beds and I came up with those guys. But now that I'm living in Georgia, it's a different atmosphere. Boxing is not as big here and people are a lot more selective. Like here in Cinci, its just work. If you have a good day or a bad day, everybody just wants to work. Down there, people get in the way ofthey don't want to spar with you if they can' t beat you. They don't want to spar with you if it's not really competitive, you know. So I like any kind of work, whether it's a good day or a bad day, I just want the work. I'm gonna always learn something from it and I'm gonna grow. One thing about me, I'm not gonna turn down or run away from no kind of hard work. If it's a different training regimen and it's harder, I'm all for it. If it's some hard sparring or world championship sparring, I'm all for it. I'm not turning away from anything. You might can beat my ass, but I'm gonna come right back. I can be in there working with the best, like Sergio [Martinez], and he might be handing me my ass, but he better believe the next day, when it's time to come back and spar, I'm ready to work because hopefully I done figured something out from the first time that's gonna stop something he was doing. It's always a learning experience, especially at this point in my career. I'm growing so much as a fighter and I'm learning so much more about my identity. It's great to be able to see the difference.

PC: Michael Walker is your opponent on Saturday night. What do you know about him?

KL: Well, it's not a whole lot that I know about him. I see he is a vet and a tough guy and he is gonna give me a different look. Like Mario told me, by the time we get to a title shot, he wants me to see all different kinds of looks. I did an interview a few days ago and I heard he is a good test for me because he is the kind of guy that makes the fights ugly and gets in there and roughs you up and all that. I know a little bit about him, but I'm really not worried about what he's gonna do. I'm gonna get in there and impose my will on him. I'm gonna dictate the kind of fight I want to fight. He want to be rugged and brawl and all that, it's ways to get around that (laughing). And all that keep coming forward and he like to keep a tight defense, but I like to come around and get it underneath and after a while, that will shut all of that down.

PC: When Winky Wright left the 154-pound division, it went through a rebuilding period. It's starting to look up again. I know you are still young in your career, but is there anyone you are starting to target?

KL: In all honesty, I'm not targeting anyone or anything like that. I'm just trying to make a name for myself in the 154-pound division. Right now, I let my promoter do his job and handle his business. He already knows what kind of fighter I am. All I am is a phone call away. You call me and say, such and such and such and suchmake the fight. I'm not ducking and dodging or turning down nothing. Under the same breath, we move accordingly, but anything within reason. So like you said, the 154-pound division is looking up and hopefully I can bring it back to flourish. Hopefully I will be in line for a world title shot some time next year. I will get a few more wins this year and then later on down the line, get a top 15 ranking and title shot and I will definitely be ready. I train hard and work hard, and like I said, I'm here in Cincinnati training, getting the work that I can get, and I'm getting ready to head right back out to camp with Broner and some different guys and he told me he got a lot of other different sparring partners coming out and different work in Colorado. I'm just going to get all work. I'm gonna get a little work with Broner in as well, but I like to work with everybody because I like to see a lot of different kinds of looks because you never know what kind of fights you are gonna be presented with. You never know when that knowledge is going to come in handy.

PC: I wish you the best on Saturday night. Is there anything else you want to say before I let you go?

KL: I would like to thank you for taking the time out to do an interview with me, and my message to the division is to just be ready because I'm coming. I'm ready to bust this thing open at 154 pounds. Like I said, I'm gonna get a couple of more wins up under my belt and then we going for a ranking, and then after we get a ranking, we gonna keep climbing. With my promoter, it's steadily a progression. I'm learning and growing and we just moving on to bigger and better things for me, as well as my promotional company and our roster and team. We just ready to work our way to the top!