ROY NELSON: "THERE IS GOING TO BE SOME THUNDERBOLTS AND LIGHTNING THROWN" 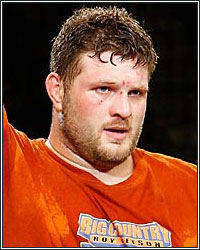 "Daniel is #2 in the rankings and the only other way to go past that is to fight for the title, so that's what I'm looking at. And he is the only fighter that's undefeated...All I gotta say is make sure you watch on October 19th on pay-per-view at 7:00 pm. You are definitely gonna see some...I can't say what's going to happen on the other side, but there is going to be some thunderbolts and lightening thrown from my side," stated UFC heavyweight contender Roy Nelson, who talked about his upcoming October 19 clash with undefeated heavyweight contender Daneil Cormier. Check it out!

PC: How has this camp for your fight against Daniel Cormier been and how do you feel physically?

RN: Physically, I feel alright. This is probably the worst training camp I have ever had just off of the fact that I lost Jeff Mayweather with his health situation and I lost some training partners. But you know...hey...I'm a fighter and I'm going to go out and fight.

PC: That's huge because one of your main training partners, King Mo, remained neutral being that he is good friends with both of you guys and Jeff has his health issues. How have you been able to replace those missing pieces?

RN: You know what? It's real hard to walk down some training partners and when you're losing good coaches. It's hard to replace, but at the end of the day, all I care about is that Jeff gets healthy and gets well because that's way more important than me actually fighting. At the end of the day, it's relationships that make my life happier and I will feel better when he's better.

PC: There was a lot of talk between you and Cormier before this fight was actually signed. Now that you guys are fighting one another, it seems like the talk vanished. Is that because you finally signed to fight him and you got your wish so to speak or was the talk just to hype a potential fight?

RN: You know what? Talk-wise, I don't think so. He's on FOX once a week or something like that, so he can talk all he wants. For me, I said my piece when I said, "Hey, you wanna fight me?" And he said, "No!" That was it. I can't tell you what he was thinking, but now that we are fighting, I am happy.

PC: Was it personal for you or do you feel like a win over Daniel Cormier could position you where you want to be in the UFC heavyweight division?

RN: Daniel is #2 in the rankings and the only other way to go past that is to fight for the title, so that's what I'm looking at. And he is the only fighter that's undefeated.

PC: Are you expecting him to come out aggressive and use his wrestling being that your last performance, you showed some conditioning issues?

RN: I think he might try and use a Cain Velasquez type of tactic of trying to push the pace and put me on the defense, but usually when you get punched, that goes out of the window.

PC: King Mo felt you were overtrained in the Miocic fight. It definitely wasn't your best performance. Do you feel you have made the proper adjustments in training and mentally to not have that happen to you again?

RN: Well, for this camp, yeah, there won't be any overtraining because it's hard to get training partners and coaches. So definitely a lot different than the last time.

PC: Daniel is from close by Lafayette; not very far from Houston. I'm sure he's expecting a large support system. Do you think about things like that or is that the furthest thing from your mind?

PC: What do you think separates you from Daniel Cormier?

RN: I think in the cage and outside of the cage, I'm the same person. I'm not trying to be...I don't try to be something I'm not. I go out there and put my hard work in and what happens, happens. As long as I give 110%, I can live with myself. But at the end of the day, I can never be accused of trying to be anybody else.

PC: A lot of people criticized DC's performance against Frank Mir. Do you chalk that up to Octagon debut jitters, do you think he looked great, or do you feel like that's just who he is as a fighter?

RN: I think he is a good gamer. I think he is a point fighter who is going to run the old school boxing analogy who implements the sweet science. He tries to analyze everything and do everything that he needs to do to get the W. If this was a no-rules and no-time limit type of thing, he would lose every time.

PC: What have you been working on to showcase in this fight, or can we expect much of the same, you coming in and throwing with bad intentions?

RN: At the end of the day, I'm going to put on a show and everybody in Houston is going to be cheering Roy Nelson.

PC: You have a lot of "Big Country" supporters out there. Before I let you go, is there anything you want to say to them?

RN: All I gotta say is make sure you watch on October 19th on pay-per-view at 7:00 pm. You are definitely gonna see some...I can't say what's going to happen on the other side, but there is going to be some thunderbolts and lightening thrown from my side! And I appreciate it and thank you Percy!