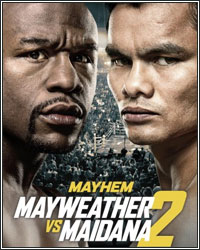 With less than 5 weeks left to go before undefeated pound-for-pound king Floyd "Money" Mayweather makes his return to the ring to face former welterweight champion Marcos Maidana in a highly-anticipated rematch on September 13 at the MGM Grand Garden Arena in Las Vegas, Nevada, the televised pay-per-view undercard is taking shape for what is considered to be one of the biggest boxing events of the year.

As FightHype.com previously reported, the lightweight title fight between IBF champion Miguel Vazquez and challenger Mickey Bey will likely be the co-main event. Bey's manager, Dejuan Blake, recently confirmed the fight was taking place on the September 13 undercard, telling Luis Sandoval of Boxingscene.com, "Mickey Bey's date has changed to September 13th as the co-main...well, I'm not sure if it's the co-main or the one before the co-main...for Mayweather-Maidana. It's going to be a good show." Prior to that, former jr. middleweight contender Alfredo Angulo will make his debut as a middleweight when he faces jr. middleweight contender James De La Rosa at a contracted weight of 162 pounds [both James De La Rosa and his manager, Adrian Clark, recently tweeted confirmation of the fight]. Furthermore, WBC super bantamweight champion Leo Santa Cruz will likely be opening up the telecast against an opponent that has yet to be determined [depending on the opponent, don't be surprised if Leo Santa Cruz gets the co-main slot instead of Vazquez vs. Bey]. Thus far, the card is shaping up to look something like the following:

FightHype.com has also been advised that there's another fight currently being considered which could alter the order of the fights, though we have yet to get confirmation on who the fighters might be.

Sources close to the situation have informed us that a jr. welterweight clash between contenders John Molina and Humberto Soto is also in play for the undercard of the highly-anticipated September 13 rematch between undefeated pound-for-pound champion Floyd Mayweather and former welterweight champion Marcos Maidana. We're told that the bout will likely alter the order of the previously mentioned card. There's also a possibility that either it or one of the other bouts will be televised on Showtime Extreme in the hour leading up to the pay-per-view telecast.

Molina last fought back in April when he found himself on the losing end of a Fight of the Year candidate with Lucas Matthysse. Soto, on the other hand, is currently riding a 6-fight winning streak, most recently scoring a 12-round uninamous decision victory over Wilfrido Buelvas this past June. Coincidentally, his last loss also came at the hands of Lucas Matthysse back in June of 2012.