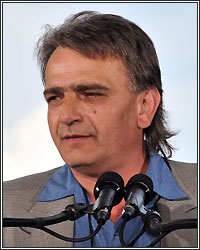 "Floyd met with us and how can I say he's not sincere. I believe he's sincere. I don't have anything to contradict the fact that he's not sincere...we looked eye to eye, we talked and I truly believe he's sincere and wants to make the fight happen...It's evident by his actions last night and I have no reason to doubt that. That's my opinion at this point in time, that he is sincere and that he wants the fight to happen. There were some concerns about the broadcasting. I promised Floyd that I would get on the phone this morning and work those out and put our foot down on certain issues," stated Michael Koncz, adviser of 8-division world champion Manny Pacquiao, who talked about their encounter wit undefeated pound-for-pound king Floyd Mayweather at the basketball game, as well as their private meeting with him afterward. Check out what else he had to say!

MK: Hey Ben, how you doing?

BT: I'm doing good. How about yourself?

MK: I saw your story (laughing). Your source is not very good.

BT: Really? So you're disputing the fact that Floyd Mayweather said something to the effect of "stop lying" and "lies are being told"?

MK: No, I'm not disputing that. I'm disputing the comment that I was stuttering and said I'm only repeating what Arum told us to repeat. I never said that.

BT: Well the stuttering part was just my sources interpretation of how you reacted to a comment. But you're saying that you never told Floyd, "Bob Arum told us these things"?

MK: No. But anyway, Manny told me don't worry about it. I'm not responding to that story.

BT: Okay. Well I wasn't calling you about that story anyway. I was actually calling because it sounds like you didn't get much sleep last night.

BT: I definitely agree with that statement, although for the past 3 or 4 weeks, you guys actually have been spouting off to the media. But I guess that's neither here nor there. So what can you comment on?

MK: Well, first of all, I give Floyd a lot of respect for coming cross court. Now, it transpired a little differently than what you wrote in your other report because I talked to Manny, then I went over to Floyd prior to halftime...

BT: (Cutting in) I wrote that.

MK: Oh, okay. We had a brief discussion and then Floyd decided to come over. So Manny and I both told Floyd after the fact that we give him a lot of credit and respect for doing that under the circumstances. Again, I've always said, when Floyd's by himself, he's very professional, very polite, very cordial, and he's pleasant to talk to. Sometimes when he's got his entourage, it's a different story, but every time I've met him one on one, including last night, it's a pleasant experience. He's knows what he's talking about. You know, we have nothing bad to say about Floyd. The guys want the fight to happen, so I think it's going to happen. We discussed a couple of issues, more so pertaining to the broadcasting of the fight, and I got on the phone this morning and I think all of Floyd's concerns have been worked out regarding the broadcasting between Showtime and HBO.

BT: I hear what you're saying now, but over the past several weeks, I've seen other interviews from you where you were very critical of Floyd, saying you didn't think he wanted the fight and he's afraid to lose his 0. Are you now saying on record that you do think he wants the fight?

MK: Well, I don't think I was critical. I was trying to be as honest and polite as I could, just relaying my opinion on it. But now, Floyd met with us and how can I say he's not sincere. I believe he's sincere. I don't have anything to contradict the fact that he's not sincere. Now if he didn't meet us in person and was just talking on the internet and stuff, then maybe I could have doubts, but he was here, we looked eye to eye, we talked and I truly believe he's sincere and wants to make the fight happen.

BT: Can you clear up some of the confusion regarding statements that were made suggesting that some type of contract was signed?

MK: For right now, Ben, with all due respect, I would like to reserve that for a day or two. Give me a day or two to talk to Manny. I told Floyd I would address that issue, but I prefer to wait for a day or two. I think for right now, the fact that we truly believe Floyd is sincere in wanting to make this fight happen. It's evident by his actions last night and I have no reason to doubt that. That's my opinion at this point in time, that he is sincere and that he wants the fight to happen. There were some concerns about the broadcasting. I promised Floyd that I would get on the phone this morning and work those out and put our foot down on certain issues. I've been told that those are resolved. I'm going to confirm that here in a few more minutes. We will address that other issue, but I think that's good for another interview a couple days down the road.

BT: As far as the broadcast issues are concerned, is it fair to say that there were still some items that needed to be worked out between the two networks?

MK: Yes. There were some hurdles that Floyd brought to our attention and I told Floyd, "Floyd, if that's the only issues, with broadcasting, there's no problem there. We can get those worked out in the morning." Because to me, they were minor issues, even though they seemed to be bigger hurdles to Floyd than we felt they were, and I did what I told him I was going to do. They're resolved.

BT: Well, now that you met with Floyd and you're now confident that he wants to make the fight happen, do you foresee anything that could potentially prevent the fight from happening?

MK: At this point in time, I feel very comfortable. Again, we have the utmost respect for Floyd. We give him all the credit in the world. It doesn't matter who approached who at the basketball game, but the events that transpired last night goes a lot towards his credibility and his demeanor as a good person.

BT: Well, it might not matter to you who approached who, but it certainly will to the fans, especially considering that for weeks on end, certain people on your side have been trying to paint the picture that Floyd's afraid to fight (laughing).

BT: You've kind of already alluded to my last question based on your previous answers, but there's been reports in the Filipino press quoting one of Manny's friends, or maybe it was one of Jinkee's friends, saying that Floyd and Manny...

MK: (Cutting in) Yeah, I saw that because I got a bunch of calls on that this morning, and I'm a little upset about that because that person wasn't even here. I'll bring that to Manny's attention when he gets up.

BT: Really? So he wasn't even in the building?

MK: No! We left him at the basketball game. He wasn't even here. Then in that article, it quotes him as saying he overheard this, he overheard that. You know, usually I don't criticize people because Manny's got me reading the Bible too, but when somebody flatly lies like that, that doesn't sit right with me either. So I'm going to bring that to Manny's attention this morning.

BT: Wow! But we can definitely say that a meeting between Floyd and Manny took place after the game?

MK: Yeah. It's true. It's true. And I think it was a very productive discussion. I like to call it a discussion, one-on-one with me, Floyd, and Manny, than a meeting.

BT: And that's basically when the issues about the broadcast were brought up? Most of that conversation took place during the meeting after the game, not at the arena, right?

MK: Oh yeah. No, no. That was done here at the apartment. And I said, I told Floyd, and Manny said the same thing to confirm what I said, that if...because to Floyd, it's important because he's with Showtime. He's getting a lot of money from them, so it's important that he can get these issues resolved where Showtime is happy with it. I told him that that was a simple thing and I'll get that done in the morning. And I have been working on it this morning and it seems to be done. I'm just waiting for confirmation.