JEFF MAYWEATHER ON HOLLY HOLM'S KO OF RONDA ROUSEY: "SHE DIDN'T FOLD LIKE EVERYBODY ELSE" 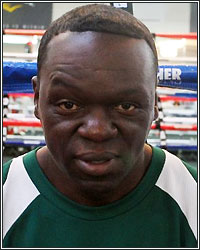 "The thing is this, it ain't have nothing to do with a boxing coach. It had everything to do with the fact that she fucked around and stepped in there with a real fighter that wasn't afraid of her ass, that wasn't going to go running as soon as she hit her...She didn't fold like everybody else...she danced circles around her and then she beat her ass," stated world-class trainer Jeff Mayweather, who shared his thoughts on Holly Holm's stunning 2nd round knockout of former UFC women's bantamweight champion Ronda Rousey. Check it out!

PC: What did you take away from Ronda Rousey's loss to Holly Holm?

JM: The one thing about Ronda Rousey's loss was that it came from a boxer. I see people out there saying that boxing pundits are making too big of a deal of her [Holly Holm] boxing career; she's a mixed martial artist. She had nearly 40 boxing fights and 9 MMA, so yes, she was a boxer. They always want to talk that smack about MMA versus a boxer and it showed what a boxer could do. A boxer beat her ass; knocked her ass out cold.

PC: Obviously if any part of Ronda's game needs work, it is her boxing. Of course this is hypothetical, but what would it take for Jeff Mayweather to train Ronda Rousey?

JM: She ain't gonna come work with no Mayweather. She making plenty of money, so if Ronda wanted to come to me, she would have to pay me. I'll get her ass right. She could talk about my nephew while I train her as long as she paying (laughing).

PC: Did you get a chance to watch the fight, and if so, what's your honest assessment on her stand-up game?

JM: I know one thing, when they were saying she was knocking out professional boxers, it was all bullshit. The thing is this, what boxers did she knock out? I already know somebody that was beating her ass anyway that's a boxer before this fight even happened, but I can't reveal their name. She has a boxing coach though and they gotta put the blame on somebody. The thing is this, it ain't have nothing to do with a boxing coach. It had everything to do with the fact that she fucked around and stepped in there with a real fighter that wasn't afraid of her ass, that wasn't going to go running as soon as she hit her. This girl had 38 pro boxing fights. She ain't fucking scared of her. And she had a kickboxing background. She didn't fold like everybody else. "Oh I'm fighting Ronda Rousey. I'm going to run and put my back to the fence and get my ass knocked out." No, she danced circles around her and then she beat her ass.

See, this is not a situation...it's different when it's one punch that knocks you out. Then you can say, "Okay, she got lucky." No, this wasn't that. She beat her ass from round one all the way until the fight was over with because you couldn't touch her. She tried to clinch her and she couldn't. Then when she ducked under and really made her look foolish, she dropped down to a knee and went up against the cage and came back. That was the end of her. She kicked her ass in the face and it was over with. All of that huffing and puffing and all of that talking and bullshit about what you could do to a man, get the fuck outta here. That was all a joke. It was all a joke. They just used Floyd's name to help build her.

Now, Oscar once again got egg on his face by putting her on the damn cover of a magazine, a boxing magazine, and she ain't never did shit in boxing. There are so many girls that deserved to be on the cover at that magazine. Holly Holm, shit, if you're going to help the UFC promote the fight, you, as a boxing promoter, should've at least had the sense to use the girl that was the former boxer on the damn cover. She was a multi-division, multiple-time world champion as a boxer and she can't get the cover? He should have been trying to promote the sport of boxing and female fighters rather than trying to promote the most popular person because she's riding off of Floyd's name. But that was the reason he put her on the cover. That's his whole fucking situation. He's so fucking jealous and envious of Floyd that he made sure he put her on the cover, hoping that she would win so that she could continue to ride off of Floyd's fucking name. But that shit backfired and you got a real fucking fighter, somebody that should have been on the damn cover in the first place, and she knocked her ass out! She knocked her out cold!