FLOYD MAYWEATHER RESPONDS TO CANELO REMATCH TALK: "I RETIRED...YOU ALREADY KNOW WHAT IT IS WHEN YOU FACE ME" 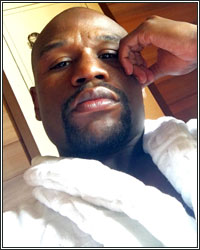 "I retired from the game; I didn't let the game retire me. Every day there's offers on the table for me to come back and fight. Every day! As of right now, I don't got the urge to fight again," stated undefeated former pound-for-pound king Floyd Mayweather, who made it crystal clear that he has no plans of making a return to the ring. Despite the fact that he officially announced his retirement from boxing over two months ago, Mayweather's name continues to be brought up when it comes to the future plans of other fighters. The latest example came this past Saturday, when shortly after his victory over Miguel Cotto, newly-crowned middleweight champion Saul "Canelo" Alvarez was asked if he'd be interested in a rematch with Mayweather.

Although both Canelo and his promoter, Oscar De La Hoya, said they'd be open to the possibility of facing Mayweather should he return, Mayweather's response suggests that they shouldn't waste any time holding their breath. "Canelo, you a good fighter, but you already know what it is when you face me, boy. Class is in session! I faced Canelo, Cotto, and Pacquiao, and I know who's the best out of the three. I know how they all rate, and I know something all three of them guys got in common," Mayweather responded when FightHype.com informed him of their comments. "They got their ass whooped by me. So this is for everybody that's always speaking about my accomplishments and everything that I've done. When the history books is written and when we're all gone, there's only going to be one motherfuckin' name that they're talking about and that's Floyd 'Money' Mayweather!"