HUGHIE FURY TALKS JULY 9 RETURN AND FURY VS. KLITSHKO 2: "I WILL NEVER GIVE UP UNTIL I REACH MY GOALS" 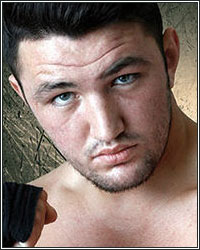 "Nothing in life is easy and I'm earning my stripes as a pro, just as I did in the amateur ranks. I will continue to keep busy and learn my trade the right way. Then when my time comes, I will not only win a world title, but defend it for a long time. I will never give up until I reach my goals," stated heavyweight Hughie Fury, who talked about his upcoming July 9 return to the ring and much more. Check it out!

HF: Everything is good, thank you sir.

PC: July 9th will be here before you know it. Are you already in heavy training, and if so, how is it going?

HF: Yes, I'm back in training, just easing into it at the moment and enjoying being back in the camp.

PC: How does it feel to be associated with a card of this magnitude? Your cousin, Tyson, is headlining in a big time rematch against Wladimir Klitschko. That has to be a big deal for you?

HF: It's always good to be on the big shows, but it's another fight for me. But my excitement will be for Tyson's fight more so than myself.

PC: Your last name carries a lot of weight in boxing now. Does that add pressure on you, especially given that you're fighting on a card that also has Tyson on it, or do you embrace the attention that your last name brings?

HF: I'm very proud of my family name and I do not feel pressured at all. I love to fight and want to do big things myself in the world of boxing.

PC: You're only 21 years old, but I'm sure you gained a ton of experience in your last several fights. You have been in there with some experienced and durable veterans. What type of experience would you say you gained in the Fred Kassi fight, as well as your fight against Dominic Guinn?

HF: In my fights with Guinn and Kassi, yes, I learn from every fight, but my biggest challenge has been health related. For both these fights, I was having some health issues relating to my skin, causing me fatigue and tiredness, as infections from my sling sores were affecting my blood stream, but nevertheless, I'm getting great learning from these fights.

PC: You recently earned a #6 ranking from the WBO. What has this journey been like for you to be knocking on the door of a top five world ranking?

HF: The WBO putting their faith in me means the world to me. I'm really greatful to them and I'm going to prove they got it right by being a world champion when I'm ready to make my move.

HF: Yes, I feel you need to have the right height and size to compete at the elite level in the new error or heavyweight boxing. Smaller guys do not really cut it on the highest of levels when they come up against a guy who is 5 to 6 inches taller.

PC: You mentioned the disease that you were diagnosed with, acne conglobata. How do you balance or combat the affects of the medicine you have to take to control this disease with your training regimen and just the everyday things that come with being a professional athlete?

HF: I am coping well on the new medication to cure my severe acne, which was causing the health issues I mentioned before. I'm still feeling tired, although I can already see improvements in my skin already. I'm told the tiredness will lapse when my body adjusts to the tablets in a few weeks. It's not interfering with my training at the moment, as I'm taking things easy until I pick up.

PC: What would you like to showcase at the M.E.N. Arena on July 9th?

HF: On July 9th, I'm hoping I feel much better so I can give the world a glimpse of things to come.

PC: Before I let you go, how do you see the rematch between Tyson and Wladimir going?

HF: I see Tyson stopping Klitschko this time and retirement for Klitschko.

PC: I wish you the best of luck in July. Let's speak again before then to get a camp update. Is there anything else you would like to add?

HF: First and foremost, thanks for the interview and everybody can follow me on Twitter @Hughiefury. Nothing in life is easy and I'm earning my stripes as a pro, just as I did in the amateur ranks. I will continue to keep busy and learn my trade the right way. Then when my time comes, I will not only win a world title, but defend it for a long time. I will never give up until I reach my goals. I love the sport of boxing with a serious passion ever since I can remember. Thank you for giving me your time and hello to the great Nation of America. Bless all of you!