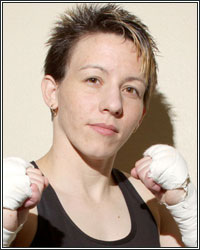 Since turning pro 19 years ago, "Amazing" Layla McCarter (38-13-5, 9 KOs) has amassed some of the most impressive accomplishments in all of women's boxing. Largely considered the best pound-for-pound female boxer in the world, McCarter has won world titles at featherweight, lightweight, super lightweight, and super welterweight. Much of her record reads like a who's who in women's boxing, and McCarter is well-respected in the sport for being willing to fight anyone anywhere, often on very short notice or with injuries. Like classic fighters of yesteryear, Layla has gone up and down in weight in order to make the best fights, frequently fighting well out of her natural weight class for the chance at an opportunity.

In a monumental move for the sport, in February 2017, Layla signed a promotional contract with Mayweather Promotions. This Saturday, April 29, Layla will fight Szilvia "Sunset" Szabados (16-9, 7 KOs) in a welterweight bout on a special edition of Premier Boxing Champions. The bout will be televised on Fox Sports 2 and Fox Deportes, with the broadcast beginning at 8:30pm ET/5:30pm PT.

"For this fight I would really like to not go the distance. I know she's a tough girl and it's hard to fight somebody like that for many, many rounds. So I'd like to get it over as soon as possible and just go home.

"So I think I'm probably gonna have more aggression in this fight, because I know that with my experience, I should be able to stop her. Claressa Shields was able to get a stoppage, by the referee, in the fourth round in her fight [versus Szabados, in March on Showtime]. So it would be nice to get it over in less time to make a statement, to have a legitimate knockdown preceding it. But like I said, this girl's tough, it's not an easy task. She may have good balance--she's been hit so many times in these fights and she doesn't go anywhere.

"If [we don't get the stoppage], we're prepared to go the distance-as always, we're in shape, we're training hard."

McCarter isn't talking trash; she knows exactly where her opponent is coming from.

McCarter began her career with no amateur experience, no backing to speak of, and no team to look out for her interests. She learned on the job, which is when the majority of the losses on her record occurred. After her first several fights, McCarter packed up and moved to Las Vegas to pursue her career in the boxing capital of the world. There she met Luis Tapia, who originally didn't want to work with her due to her poor record at the time. But once he saw Layla box, he agreed to manage and train her. Since then, Layla has gone on to fight the best and win multiple world titles, often playing the role of the underdog and winning.

About her opponent, McCarter said, "She turned pro in 2014, three years ago. And in that time she's been very busy, accumulating almost half as many fights as I have in my almost 20-year career. She's fearless. She fights anybody, anywhere. I know she has a big heart. I've seen evidence in her fights-she gets hit and she just keeps coming. It's hard to fight somebody like that. She's got a lot of heart and she's fearless. The more she gets hit, the more she keeps trying to hit the other person.

"Skill-wise, she needs a lot of work and experience, but in the heart department, she's got more than enough. If she can hang in there and learn moreshe's got the things that you can't teach. The toughness and the heart."

Szabados is a late replacement, as the Nevada State Athletic Commission surprisingly didn't approve Layla's originally requested opponent who only has three losses (all by decision).

Layla knows what it takes to be a champion both inside the ring and out. For years, she has fought tirelessly to change the standard two-minute rounds in women's boxing to be the same as men's (three-minute rounds). She's made great strides, as it was thanks to her work that the Nevada State Athletic Commission changed their rules to state that, if both fighters opt in, women can choose to fight three-minute rounds rather than two.

"I've been fighting for years to make this change," Layla continued. "I've always been against women fighting two-minute rounds. I think it's a dumbing down of something-it's unnecessary. So I pushed the Nevada State Athletic Commission for years to change it, and then when Keith Kizer took the position as the director of the athletic commission, he was already in agreement with me on that. So he was able to talk to the chairman and get it done, and they voted it through.

"And then the ABC, the Association of Boxing Commissions which helps with recommendations-Tim Lueckenhoff, I talked to him, he was the president of ABC. And I told him that they should equal up the recommendations. A lot of boxing commissions base their rules off the ABC. And in their recommendations they stated that 'women should fight no more than 10 two-minute rounds, and men should fight no more than 12 three-minute rounds.' So I told them, if you could just equal that up, it would make a lot of difference. If it just said, 'all fighters should fight no more than 12 three-minute rounds.' And they voted it and changed it, and he pushed the change on my behalf. So we changed it there so that way, when we go to any state, we can say, Look, the ABC has no problem with it. Now they can't point to the ABC and say it's because the ABC recommends it."

Now, thanks to McCarter, a precedent has been set for women's boxing. "So we were able to change that. The Nevada State Athletic Commission [has the rule] on a waiver system where, if two fighters are approved to fight in the state of Nevada, they can opt to fight three-minute rounds with each other. I would like to make it mandatory but that was a good first step. We have to take it step by step. Start there and keep moving forward.

For those who may not understand the importance of three-minute rounds versus two minutes, I asked Layla to explain further. "I think that a professional fighter needs a three-minute round because usually the most action happens in the last minute of the round, after the fighters have gauged each other's distance, found their weaknesses. You know, it's a process, and by the time they figure that out, the bell rings. It's so frustrating. I think there would be a lot more knockouts in women's boxing if they allowed that final minute, and a lot more action, too. It would be a lot more fan-friendly. And people [who] argue that two minutes is more exciting-well then, fine, make the men's two minutes too. It's just a way to make it like 'the women can't do it.' And they can do it.

"UFC did the same regulations [for male and female fighters]-5 five-minute rounds. Who would've thought the UFC would be a standard of equality? But things change, and boxing needs to catch up."

For her fight against Szabados on Saturday, what will be the length of the rounds? Since the fight is taking place at Sam's Town Live in Las Vegas, the three-minute round option should be there.

"It was supposed to be [3-minute rounds]," Layla explained. "[The director of the commission, Bob Bennett] wants us to fight 2-minute rounds, which I'm totally against, so I'm hoping to talk to him. Being that that's been my big fight over my career. It would be just devastating for me to have to fight two-minute rounds.

"We're hoping the new athletic director [Bennett] will understand the direction we want to go, the way [Keith Kizer] did."