ERROL SPENCE AS REAL AS IT GETS ON TERENCE CRAWFORD "LEGENDARY" FIGHT: "DEFINITELY STOP HIM"
Tweet 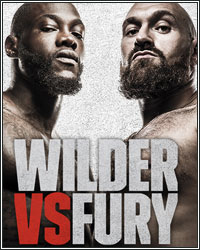 Deontay “The Bronze Bomber” Wilder and Tyson “The Gypsy King” Fury fought to a split-decision draw on SHOWTIME PPV® on Saturday night from STAPLES Center​ ​in​ ​arguably ​one of the best heavyweight fights in years​.​

“I think with the two knockdowns I definitely won the fight,” said Wilder, who has recorded a knockdown in each of his 41 pro fights and was defending his WBC belt for the eighth time since 2015. “We poured our hearts out tonight. We’re both warriors, but with those two drops I think I won the fight.”

Fury saw it differently, stating that he gave it everything he had.

“We’re on away soil, I got knocked down twice, but I still believe I won that fight,” said England’s Fury, whose amazing comeback continues following a two and a half-year absence from the sport from drug and alcohol addiction and mental health issues.​ “I hope I did you all proud after nearly three years out of the ring. I was never going to be knocked down tonight. I showed good heart to get up. I came here tonight and I fought my heart out.​"​

Fury, who out-landed Wilder 84-71 overall, was caught by a short right hand by Wilder just behind the left ear to drop Fury for the third time in his career in the ninth round. Then in the 12th, a Wilder right hand and left hook combination sent the 6-foot-9 Fury down again, hitting his head on the canvas. Again, he managed to ​stand​ up and referee Jack Reiss let him continue to fight.

“Boxing is always the theatre of the unexpected, and that’s what we had tonight,” SHOWTIME expert analyst Al Bernstein said.

Bernstein said seeing Fury get up and continue to fight after the brutal knockdown was “one of the most astonishing things I’ve ever seen in the boxing ring.”

Because of a rematch clause, both fighters were asked if they would like to do it again. “I would love for it to be my next fight,” Wilder said. “Why not? Let’s give the fans what they want to see. It was a great fight and let’s do it again. It doesn’t matter to me where we do it.”

“​One hundred​ percent we’ll do the rematch,” said Fury, fighting in the first heavyweight title pay-per-view bout in America since 2002. “We are two great champions. Me and this man are the two best heavyweights on the planet.”

Wilder said he came out slow and rushed his punches. “I didn’t sit still. I was too hesitant. I started overthrowing the right hand and I just couldn’t adjust.”

Fury, fighting for the third time this year with 26-year-old trainer Ben Davison in his corner, also had former boxing great Ricky Hatton and seven-time Trainer of the Year Freddie Roach in his corner.

In the lead-up fight to Wilder-Fury, “Swift” Jarrett Hurd (23-0, 16 KOs) defended his 154-pound IBF and WBA world title belts with a fourth-round knockout against United Kingdom’s James Welborn (24-7, 7 KOs), who was fighting for the first time on American soil.

Welborn was the aggressor in the first minute of the fourth round, sending Hurd to the ropes with punch after punch to the body and head. Suddenly realizing he might be in trouble, Hurd of Accokeek, Md., countered back from sudden adversity in dramatic fashion and sent Welborn back-tracking before a devastating body punch sent him to one knee. He was counted out at 1:55 by referee Lou Moret, who was officiating the final fight of his 30-plus year career.

After the fight, undefeated super welterweight Jermell Charlo entered the ring to challenge for Hurd’s coveted belts. “We definitely want Charlo,” Hurd told SHOWTIME Sports' Jim Gray, saying the matchup would likely occur after one more fight. “I’m calling the shots. I’m No. ​1​ right now. When I say answer the phone, answer the phone. I got the date.”

Charlo shot back. “This is easy money. I like those belts – they look real good on you. He said he wants another fight. I’m ready now.”

Hurd, who unified the WBA and IBF belts by beating WBA champion Erislandy Lara in April in Las Vegas, was returning with a surgically repair left shoulder. He threw 118 jabs, more than half of the 220 punches he threw in the fight.

“I’m just coming off surgery so I wanted to see how I worked off the jab,” Hurd said. “I felt good I was working behind the jab I got caught on the ropes and got caught with some shots and said ‘that’s enough. He got enough TV time.’ I heard the crowd and I didn’t want to get brave. So I turned it up and got the knockdown.​"​

The 39-year-old Ortiz of Camaguey, Cuba, registered left-cross knockdowns in the sixth, eighth and 10th rounds before the final blow coming later in the 10th round against a gritty Kauffman. It was the 26th career stoppage for Ortiz, who lost to Wilder in a Fight of the Year candidate back in March.

The fight was officially called at 1:58 of the 10th round. “I’m a warrior,” Ortiz said. “Nothing contains me. We didn’t have to knock him out but we wanted to show everything we have in our repertoire, and we showed it tonight.”

Ortiz, who was warned twice for low blows, clipped Kauffman for a second time by a lethal left hand of Ortiz at 2:29 in the eighth round. But just like the first time he was send to canvas in the sixth round, Kauffman was able to get up and continue fighting.

The technically sound performance by Ortiz included 376 jab attempts to Kauffman's 99 and out-landing him 66-7. That led to a 135-37 lead in total connects and a 69-30 margin in power connects against Kauffman, who SHOWTIME commentator Paulie Malignaggi called, “a stubborn guy who wouldn’t go away.”

“Of course I’ll fight the winner of this fight [Wilder-Fury],” Ortiz said. “I want that second fight with Wilder. I want to fight anybody.”

In the ​pay-per-view​ telecast opener, Joe “The Juggernaut” Joyce (7-0, 7 KOs) recorded a massive first-round knockout against Joe “The Future” Hanks (23-3, 15 KOs). A rising heavyweight, Joyce, from London, England, ended the fight officially after just 2:25 as he used a right jab to set up a near-perfect left hook sending Hanks to the canvas and down for the count.

Trained by noted trainer Abel Sanchez, Joyce told Gray he’s ready for anyone. “I want to get in some bigger fights,” said the former Olympic silver medal winner who recorded his fourth first-round KO. “I’ve been doing well so there is plenty more to come. All the support from back home in England, thanks for coming. I hope I put on something good to watch.”

It was the second win in the United States for Joyce, who also picked up the vacant WBA Continental heavyweight title. “I’m getting people out quickly,” he said. “I’ve got a lot of experience, I’m just going to improve on my strength and my speed. I’ve heard comments that I’m slow but I seem to land the shots and get the job done.”

It was the third time during his career that Hanks, from Newark, N.J., has been knocked down by a left hook.

Earlier in the night on SHOWTIME BOXING: SPECIAL EDITION Adonis Stevenson’s five-and-a-half year reign as the WBC Light Heavyweight Champion of the World ended as Oleksandr Gvozdyk dethroned boxing’s longest reigning champion with a devastating 11th round knockout from Videotron Center in Quebec City. VIDEO: https://s.sho.com/2BMNZIx. Saturday’s one-fight telecast from Quebec City will replay on Monday, December 3 at 10 p.m. ET/PT on SHOWTIME EXTREME and will be available on SHOWTIME ANYTIME® and SHOWTIME on DEMAND®.  The SHOWTIME BOXING: SPECIAL EDITION streamed live on SHOWTIME Sports social platforms and is archived on the SHO Sports YouTube channel and Facebook page.