MARIO BARRIOS SAYS AFTER "FIREWORKS" WITH VELASCO, A TITLE SHOT IS ON THE HORIZON; DISCUSSES UPCOMING CLASH 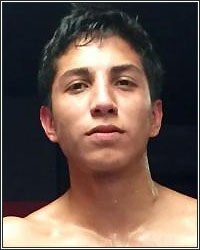 "When a fighter is coming off his first loss, they are usually better after that. He will be gunning for my head, but I’ll be firing right back at him. I will be well-prepared for anything he brings. It’s going to be a great fight for the fans...I’ve earned my way to the #1 ranking by fighting stiff opposition and a world title shot is right around the corner. I must be victorious against Velasco first and foremost. He is my main focus at the moment, but I do see a big fight on the horizon," stated jr. welterweight conender Mario Barrios, who talked about his upcoming return to the ring against Juan Jose Velasco. Check out what he had to say about the fight and much more!

PC: May 11th, you will be facing the once-beaten Juan Jose Velasco. How has preparation been for this fight?

MB: I’m well-prepared going into this fight as I’ve been out in the Bay Area for the last six weeks getting ready. Virgil and I have been working on a lot of things, especially using my reach. I’ve also been training with Victor Conte and the SNAC team. I’m in great shape and feeling strong.

PC: The only guy to beat Velasco is possibly the hottest fighter out there right now and that is Regis Prograis. I was actually at that fight and Regis did a lot of damage to the body. Being that you are already a good body puncher, I’m sure that will be a focal point for you.

MB: Yes, going to the body is always a big part of my game plan. That’s something I will do against Velasco. I was actually there too at that fight. Regis Prograis is a very talented fighter and I see myself fighting him one day. I will certainly exploit some of the things Prograis did against Velasco.

PC: Velasco, however, is very durable. He’s flying in from a long ways away and he’s coming off of his first career defeat, so I’m sure you are preparing for a very determined and hungry fighter.

MB: Absolutely! When a fighter is coming off his first loss, they are usually better after that. He will be gunning for my head, but I’ll be firing right back at him. I will be well-prepared for anything he brings. It’s going to be a great fight for the fans.

PC: You have stopped your last 7 opponents. Do you feel like your power is coming with ring maturity, your body filling out into the division, or are you sitting down on your shots more?

MB: I believe it’s a combination of all of the above. I was killing myself before moving up to 140. Now that I’m not having to cut that extra weight, I feel super strong. In addition, Virgil has improved all aspects of my game, especially my punching power and setting up my power shots. It’s all coming together nicely.

PC: Including Velasco, the record of your last 5 opponents is 99-10-1 and you already have a 12-rounder under your belt. Do you feel like given your opposition and going 12 rounds already, you should be knocking at the door for something huge later this year or early next year if you’re successful on the 11th?

MB: I feel like I’ve earned my way to the #1 ranking by fighting stiff opposition and a world title shot is right around the corner. I must be victorious against Velasco first and foremost. He is my main focus at the moment, but I do see a big fight on the horizon.

PC: What are you hoping to display in this fight?

MB: That I’m the best super lightweight in the world by showcasing my superior boxing skills. I want to display my punching power by getting a knockout. If the fight goes the distance, then I want to show how dominant I can be.

PC: What are your thoughts on the WBSS tournament and its standings right now, as well as the two guys on the outside of the tournament, Maurice Hooker and Jose Ramirez?

MB: The WBSS is a great tournament. Regis Prograis looks to be the favorite, but Josh Taylor and Ivan Baranchyk are both really good fighters as well. It’s going to be interesting to see who comes out on top. Hooker and Ramirez are tall fighters like me who like to mix it up. In my opinion, the super lightweight division is the most talented in boxing.

PC: Everyone points to your height as your best asset or advantage at 140 pounds. What do you feel like will eventually separate you from the pack, and is junior welterweight going to be your home?

MB: I like to think that it’s my boxing ring IQ. That is my best asset. Virgil and I have been perfecting my game and to be the best, you must have the ring knowledge to go with your boxing skills. I’m sure after a year or so, I’ll be moving up to 147, but right now, I’m comfortable making 140 pounds. But as I get older, my body will force me to go up in weight.

PC: Good luck to you next Saturday night. I look forward to seeing you fight again and we will catch up afterwards. Is there anything else you would like to add? Anyone you want to thank?

MB: I want to thank my family, my team, and everyone back home in San Antonio for their support. You can follow me on social media at @boxer_barrios. Tune in to FOX this Saturday night to see a great night of boxing.  You will not want to miss me in action as I promise to bring some fireworks to the event.