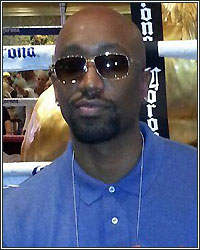 "I’m not conceding anything. I’m not giving, Jarrett Hurd any advantages over Julian at all. We gotta see how they line up in the ring and then we will find out if he’s stronger, punches harder, if his inside game is better or his outside game is better. We going to find out all of these things on May 11th. As a team, we haven’t conceded anything to that man. He’s going to have to prove everything that they say he is come May 11th," stated Stephen "Breadman" Edwards, world-class trainer of jr. middleweight contender Julian Williams, who talked about their upcoming showdown with unified jr. middleweight champion Jarrett Hurd. You don't want to miss what else he had to say. Check it out!

PC: This is a huge fight for you guys on Saturday night against Jarrett Hurd. We hear about how big he is and how much pressure he applies. While breaking him down, I’m sure you see more to him than just that.

SE: Yeah, I do. Hurd is a good all-around fighter. There is more to him than just pressure. He has a good IQ, he has a really good jab; he can do a lot of things in the ring. Sometimes people just know you for the stuff that you do in your bigger fights, but I’ve been watching him for a minute. I have seen him do a lot of different things. The boy can fight. He can fight. He’s got a lot of layers to his game.

PC: There appeared to be a short period where it seems he was overlooking Julian by talking about fights he wanted to land at 160 and things like that. More recently, he stated that he knew this was a dangerous fight and he had a lot of respect for y'all. Did you ever sense he was overlooking J Rock?

SE: I really don’t know. I know him in passing and from what I see in the ring, but I don’t know if he’s the kind of kid that would overlook somebody or not. I really can’t say that. I’m not qualified to answer that because I don’t know him well enough to know if he took Julian serious or not.

PC: J rock has been in camp with some great fighters. Are you happy with the work you guys have put in for this fight?

SE: You know me, Perc, I’d rather not say who he’s been working with. If somebody knows about it from the internet or someone posted it, that’s fine, but just out of respect for the other trainer and the other fighter, I really don’t get into that. It’s just sparring at the end of the day, but we’ve had a good camp. We’ve got sparring partners that I felt as though would help with Hurd’s style; things that I thought Hurd would pose in the ring. We sparred with guys that Hurd may or may not be able to beat in a real fight. I don’t know. We had really good sparring for this camp.

PC: Looking at the face off, J definitely seems to be in that zone. Do you sense that as well?

SE: Yeah, for sure. I think he’s in a good place mentally. I know Hurd was saying he was nervous, but I haven’t watched any of that stuff, man. People talk about it, but I try to stay off the internet and the comments and everything. I’m busy training and doing stuff with my kids or whatever, so I don’t really get into that. I haven’t seen all that. I don’t know if Hurd knows Julian well enough to say if he’s nervous or not, you know what I’m saying. Sometimes you can just overdo it and overanalyze stuff like that. It’s a fight at the end of the day, but I don’t know if he knows him well enough to be able to say stuff like that. Maybe he was at the face off, I don’t know, but it don’t matter because sometimes nerves is a good thing, man. Sometimes nerves will keep you on point. The saying goes, “A coward and a hero feels the same thing, but it’s what the hero does that makes him a hero and it’s what the coward doesn’t do that makes him a coward.” So I want a fighter that’s nervous. I want a fighter that is a little bit on edge before a fight because you’re more on point. Your awareness level is up. It’s all about perspective. He said Julian was nervous; that’s a good thing. We will see. That’s all I can say is we will see.

PC: You just talked about staying away from the internet or at least talks of this fight leading up to it. Why is that important for you?

SE: Sometimes people will send something to my inbox or screenshot something and I respectfully tell them, “Man, I don’t want to hear that shit.” I didn’t get nobody's opinion in order to take this fight. I didn’t get nobody's opinion as far as training is concerned, so I damn sure don’t want to hear nobody's opinion on what’s going to happen or how we should go about it. For me, it is important to stay away. Now fighters, you can’t control their social media. They simply have to have enough discipline and focus to not get caught up in that. It’s an extra thing you gotta worry about, but at the end of the day, Perc, that’s on the fighter. I’m past the stage of walking around with a fighter telling them to put the phone down. Don’t do this and don’t do that. If they want to allow social media to affect them; social media can fuck you up. It can fuck your whole day up. Somebody say the wrong thing about your family or your kids or you’re in the wrong mood; look what happened with Yusaf Mack. He had a troll and he wound up beating him up. For real, you run into people sometimes. You gotta be real careful with social media, man. Social media can cause you a whole lot of problems. I personally stay away from it, but Julian is not a kid. He’s 29 years old with kids and a family. He knows what he gotta do.

PC: Not asking to reveal the game plan, but what do you feel Julian has to have success with to win this fight and what are your thoughts on Hurd talking about his next move and things like that?

SE: Well, first of all, Hurd talking about his next move can be a ploy. I have seen fighters bring up their next fight, right, so they can get the judges in their pocket. It’s a ploy to get an edge with the judges so they can say, alright, I got this big fight coming up so they can get the close rounds and stuff like that; so that can be a ploy. You’d be surprised what and why somebody say and do things. I think we got three good judges who will be fair and objective and that’s all you can ask for. I don’t care what anybody says about the fight. We will find out on May 11th. I think it gives fighters more motivation when people say they are going to lose. The real fighters would rather you go against them than for them. As far as what Julian has to do, it’s real simple, Perc. He has to be at his best when his best is needed. His best is going to be needed on May 11th. Jarrett Hurd is no slouch. We gotta see. We gotta find out. As a trainer and as a team, me, Asim Beyah, the whole team, we haven’t conceded anything to Hurd. The only thing that you can concede is something that is tangible. Hurd is a little taller than Julian. Okay, fine. Everybody says he’s stronger, he’s a better puncher, he’s this and that. We don’t know that until we get in the ring with him.

If you looked at Mike Tyson and Evander Holyfield before they fought, you would say that Tyson is the harder puncher. When they got in the ring, who was the harder puncher? When you look at Hearns and Leonard before they fought, you would say Hearns was the killer and the harder puncher; Leonard had to box. But what happened in the fight. Leonard started walking him down and ended up stopping him. So we’re not conceding anything. Hurd’s stamina and punching power, all of these things that they say is an advantage of his, we gotta find out. The last time I checked, Hurd and Julian both got 16 knockouts. The last time I checked, they both got the same amount of late stoppages after the 6th round. I’m not conceding anything. I’m not giving, Jarrett Hurd any advantages over Julian at all. We gotta see how they line up in the ring and then we will find out if he’s stronger, punches harder, if his inside game is better or his outside game is better. We going to find out all of these things on May 11th. As a team, we haven’t conceded anything to that man. He’s going to have to prove everything that they say he is come May 11th.

PC: Good luck on Saturday night. As always, we will check back in after the fight to get a word with you. Is there anything else you would like to add before I let you go?

SE: Thank you! I appreciate everything throughout the years, Perc.