TAY JONES OPENS UP ON RECENT WIN AND DEONTAY WILDER SUPPORT: "BREAZEALE IS GOING TO GET THE BEATING OF HIS LIFE" 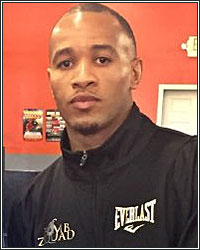 “Any time the champ [Deontay Wilder] walk into the building, that actually got the other guy riled up. He got riled up like he was there for him. But any time you’re fighting somebody from the Bombzquad, all eyes are on you and everybody trying to beat your brains in; believe that...Breazeale is going to get the beating of his life,” stated up-and-coming prospect Tay Jones, who talked about his latest win, his future plans, and much more. Check it out!

PC: Congratulations on the win. It was a long time coming for you because your previous opponent failed his physical, so you had to wait, but the wait was worth it. How did it feel to be back in there?

TJ: It felt real good. More than anything, it felt good to be doing what saved my life. Any time you doing what your passion is and what saved your life, you gonna be happy to be back in there doing it anyway. I was just happy, man. And now we put our track shoes back on and we’re back off to the races.

PC: You always tell me how boxing saved your life. Could you elaborate on that for the readers?

TJ: People gotta understand, I played college football. One of my older brothers played football as well in the NFL; it was inspiring. Being from Atlanta, you know football big in the south, so me going on a football scholarship, I was trying to make it happen just like any other American dream out here for these young kids. I’m rooting for them. I was once in their shoes and I tried to make it; unfortunately things came up in school and I was kicked off the team twice. Just being me trying to find myself and I couldn’t find myself. Then at the same time, my parents were going through a divorce, I had got a chic pregnant, and my grandmother, she wasn’t even my biological grandmother, but she treated me like a grandson and it was a grandmother’s love that I never had before. She took care of me and she passed away. I was dealing with all of that stuff at one time to the point where I just shut down, bro. On top of that, I didn’t have nowhere to go. My living arrangements, by this time everybody had done moved out of Chattanooga, Tennessee, where I went to school at. They had moved away or had done graduated and I’m still there. I had nowhere to go. I was tired of trying out for different teams. I never been to a point in my life where I just gave up, but I was just tired. I remember praying one day. I fell asleep praying. I really don’t tell a lot of people this story, but I fell asleep praying. I remember asking God to just let me do something with this talent. I ain’t never in a million years, even though my stepdad taught me how to fight when I was younger, but never in a million years did I think I would be back in a boxing gym. I woke up, ended up in a boxing gym, and I ain’t left out that motherfucker since, bro.

PC: For sure. Tell us about your performance. How do you feel you performed?

TJ: I feel good about my performance. There is just one thing; I knew something was bothering me during the fight. The mat was real slippery and I caught myself a few times trying to put some real heat on some power punches. I said, you know what, I’m going to slow it down, stay composed, and keep my composure and let that shot come and it did. I felt real good about the fight. There is nothing he did other than move all night, but that just gave me a different look. But hell, I get that all the time in the ring. When you possess power, people are going to run from you anyway. That’s the same thing that happened in my last fight, but this guy right here was more creative. He was more of a technician, but he was also a big mover. I knew he was going to be on the run, but at the same time, the positive energy that my Bombzquad Brother’s bought...any time the champ [Deontay Wilder] walk into the building, that actually got the other guy riled up. He got riled up like he was there for him. But any time you’re fighting somebody from the Bombzquad, all eyes are on you and everybody trying to beat your brains in; believe that.

PC: I’m sure it meant a lot to you to have Deontay there, and Dre Kirkpatrick from the Cincinnati Bengals was there for you as well.

TJ: That meant a lot, man. You just mentioned Dre Kirkpatrick's name, man, people don’t understand;  I met Dre through my brother that played in the league. Dre is one of them guys that no matter what the situation is, it’s like I posted on Instagram, no matter how much money you got or how much you don’t have, support is support. For that man to show up at my fight, I didn’t even know he was there until I got out of the ring. I was like, “Damn! This motherfucker really came.” It’s crazy because I hadn’t talked to Dre in a couple of months. It’s been a check here and there on an Instagram level, but me and Dre got a big-time relationship outside of football. We talk about life in general. Dre has helped me out on different levels, so salute to Dre Kirkpatrick and his team for coming through. For me to have Deontay there, and Chris and Joey, the Bombzquad members…I wanted to tear up so bad. From the very first time I met D [Deontay] when we sparred, I was like 185-190 pounds. That was 8 or 9 years ago. For him to be there and for him to see things in me that I didn’t see in myself, that was big, bro. D always told me anything that he has, he worked hard for it. He always says, “If you work just as hard as I did, you could have the same things.” Not one time did D say, “Bruh, you need to give up. You need to go do this or go do that.” He always spoke positive energy on me. He believed in me when I didn’t believe in my damn self. People don’t understand, to have him in the building, not too many people can say that.

PC: Deontay is up next. The Dominic Breazeale fight is finally going to happen. There is a lot of bad blood between the camps and you were there when it all started.

TJ: (Laughing) Yeah man, he blocked all of us on social media; the entire Bombzquad camp. It’s crazy because he got on Instagram one day and I guess he was feeling good about himself and he just went on a little rant. He was calling D out and everything, so I was like, whoa, whoa, hold on. Me being me, I had tagged all of the Bombzquad members in there. Before I could count to one, everybody was on his ass. The whole team was on his ass. It got to the point where I couldn’t see it anymore. We got a group chat going and I asked if they could see it and come to find out that nigga blocked us. It’s crazy how this man could try to press charges and say all this false shit that he was claiming and then block us. Where they do that at? But you so heated and saying we carry 20 members and this that and the third. Man, we ain’t never had 20 members with us. The only time it was remotely close to that was after the Ortiz fight and D had that Frank Lucas jacket on. Other than that, we ain’t never walked around or had 20 people around us. None of us are those type of people. We are really homebodies. Now, we got the whole hood behind us. Don’t get it misconstrued. But we are positive people. I just felt like for Breazeale to do that, that was some real pussy shit. If you come from where I come from, that ain’t real, man. Come on, man.

PC: What result are you expecting on May 18th?

TJ: The only thing I know is D has already transformed. He is no longer Deontay. He is the Bronze Bomber right now. Once you get that Bronze Bomber mentality, it’s a whole 'nother ball game. Given the magnitude of this fight and because of what happened with Marsellos, which is his younger brother, the false accusations and wanting to sue and things of that nature, Breazeale is going to get the beating of his life. Like I told D, I fear for his life. Deontay was like, “Don’t feel bad for him. Don’t feel sorry for him. Fuck him. He said all he said; we gonna see if he really means what he says.” I know one thing, D means what he says. I don’t see this fight going no longer than 4 rounds. It actually depends on D. He made a statement that he was going to batter him and then knock him out, so with that being said, he may batter him the whole first round and second round and then clean him up in the third round. You gotta be damn near perfect against D.

PC: I’m so happy for you, man. Congratulations again on the win and good luck with Deontay’s fight as well. Is there anything you want to add before I let you go?

TJ: I just want to thank the whole Bombzquad. I definitely want to thank you. You have been down since day one. You don’t meet too many people like yourself and you are the only person that I talk to from FightHype and that I will talk to from FightHype. I just wanted to say thank you for being a genuine person and being the down to earth person that you are. Shout out to my whole team and we are on the go.