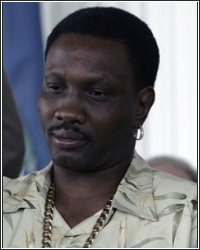 According to TMZ Sports, boxing legend Pernell Whitaker was killed Sunday night after he was hit by a car in Virginia Beach. He was only 55.

Officials received a call around 10:04 PM in response to an accident at the intersection  of Northampton Boulevard and Baker Road.

When cops arrived, they located the man who had been hit by a vehicle who was in really bad shape -- and that man was Pernell Whitaker.

Unfortunately, Whitaker succumbed to his injuries and died.

Cops are investigating. Unclear if the driver of the car was arrested.

Whitaker (who's from Virginia) was a BEAST in the ring ... winning world titles at 4 different weights -- lightweight, light welterweight, welterweight and light middleweight.

Sweet Pea was inducted into the International Boxing Hall of Fame in 2006 -- and is considered by many to be one of the greatest fighters of ALL TIME.