NOTES FROM THE BOXING UNDERGROUND: WHAT A MIKE TYSON "COMEBACK" SAYS ABOUT BOXING 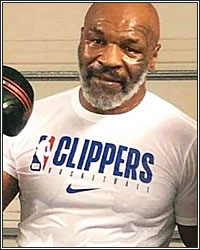 Don't get me wrong, I fully support Mike Tyson making a comeback and collecting tens of millions from dumb and desperate networks and promoters. I hope he empties out their coffers and bankrupts these idiots. $20 million in the hands of a more level-headed 54-year-old former "Baddest Man on the Planet" is more of a godsend than the $685 million earned as a fiery 20/30-something.

All this started a little while back with a brief video clip of an in-shape Tyson training and looking sharp. It was only about 7 seconds, but it was enough to push boxing-hungry fans and headline-hungry media into a frenzy.

The word was that Tyson was training for charity exhibitions. No problem there, right?

Evander Holyfield would soon follow in Tyson's steps. There was a Holyfield workout video. Then, the word that he'd also be doing exhibitions for charity. Ideally, he'd like to face Tyson in an exhibition.

Two former greats competing in a safe four-round exhibition for a good cause. Still not a problem, right?

But all of this buzz-- and when CNN starts reporting on boxing, that is some major buzz-- is bringing major money to the table now. Philanthropy be damned.

A $20 million offer came in from a bare knuckle boxing outfit. Wrestling company AEW latched on to the Tyson train for an undisclosed amount of money. And, as Tyson's business people reportedly began reaching out to money marks for possible deals, Tyson released another brief training video-- this one ending in a tantalizing "I'm back!"

Head of Matchroom Boxing and lead promoter to streaming service DAZN, Eddie Hearn, says that he's already been contacted about a comeback-minded Tyson.

The British promoter, however, claims to have some ethical reservations about all of this.

"I would like to see it. But I kind of feel like, and I know people will say 'Well, you did the YouTube fight with KSI' but is it a bit irresponsible to let a 53-year-old legend get back in the ring? I don't know. He looks pretty dangerous, but I think it's just the fascination of could he actually go in at 53 and do some damage in the division? Maybe, maybe not."

Despite the flowery words and stagy concern, there's probably a really good chance that Hearn (and DAZN) would love to get their hands on Tyson-- especially now, with the Covid-19 shutdowns ravaging subscription tallies and turning their paywalls to rusty monoliths.

And if Hearn/DAZN don't take on Tyson, it's a sure thing that somebody else will gladly step up with checkbook in hand.

It speaks volumes about the state of the sport that a 53-year-old former champ teasing a comeback would overshadow everything else happening in the present tense scene. Even with Tyson being a worldwide superstar in his prime, he shouldn't be THE story in boxing for weeks.

The hard, cold bitch-slap of truth is that something like a Tyson comeback (or the rumor of a possible Oscar De La Hoya-Conor McGregor bout) eclipses everything else because it's so much bigger than anything else involving anyone currently active in the sport.

So, why aren't active fighters from the present tense being hailed and subject to heated rumors like those involving Tyson and De La Hoya (or Mayweather, for that matter)? It's because putting together a legacy-defining fight with active fighters these days is like pulling teeth. And if these guys won't/can't fight anyone the fans want to see them fight, can't establish a real legacy, the fans just don't care all that much about them.

Not to beat a dead horse, but the sport's rotten business model, which intentionally cock-blocks cross-company battles in favor of safer "in-house" showcases and then has the audacity to put all that filler behind paywalls, is strangling the life out of boxing.

A fighter CAN'T become a Tyson or a De La Hoya these days because they will never be allowed to have the body of work that a Tyson or a De La Hoya had or, as a result of how the business is cordoned off, to fight in front of as many eyeballs. Canelo Alvarez comes closest to fulfilling the requirements of true superstar status, but even with him, the depth of resume, the overcoming of true challenges, the historically-relevant performances aren't really there.

It's pretty sad when you think about it. The most relevant boxers to the vast majority of the general public are those long-retired-- 10, 20, 30 or more years in the past. This speaks volumes about the present.