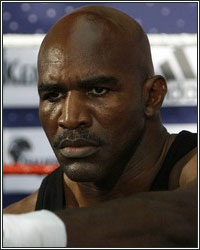 If there was any question as to how much Triller respects the sport of boxing, this Saturday’s Fight Club Legends 2 pay-per-view card provided a firm answer-- Zero.

The jackals in charge of boxing programming at the video sharing/social networking service served up a boxing legend in Evander Holyfield as a sacrifice and didn’t think twice in doing so.

The 58-year-old former 4-time heavyweight champ and Hall of Famer, Holyfield, stepped in to replace Oscar De La Hoya against UFC Hall of Famer Vitor Belfort on just over a week’s notice and looked exactly as expected in suffering a cringe-worthy first round TKO.

Fight week video training footage of the retired “Real Deal” showed him to be weak-legged and excruciatingly slow-fisted. The video raised red flags about whether he should be in the ring (if anyone actually needed to have those red flags raised).

The California State Athletic Commission saw what everyone else saw and refused to sanction the 8-round fight with Belfort, forcing Triller to move the entire show to weak-commissioned Florida.

The show went on and the debasing of a legend went ahead.

A day or two before jumping into this bout as a late replacement, Holyfield had filed for arbitration seeking the $5 million he claims to be owed for an agreed-upon bout with Kevin McBride that never happened. The head hucksters in charge of Triller Boxing surely saw subbing Evander for Oscar as a way of killing two birds with one stone-- the pay-per-view gets saved and an arbitration headache gets quashed. They didn’t bother to think that their win-win was a lose-lose for everyone else, especially for a guy who had no business being in the ring. If this were an exhibition where the fighters take it easy on one another, fine, but to put Holyfield in a "real" fight-- even against a boxing novice like Vitor Belfort-- that's just negligent and disrespectful.

Yeah, yeah...Holyfield is a grown man and made a respectable payday. But fighters will be fighters and sometimes promoters, managers, and event organizers have to be the voices of reason. Sometimes you have to NOT be a callous prick.

To make matters even worse, Donald Trump and Donald Trump Jr. were doing alternate gamecast commentary for the show and got plenty of gushing recognition throughout the telecast-- a touch which was like drizzling frothy diarrhea on top of warm vomit...in a dumpster...filled with horse shit.

The rest of the show was also crappy, by the way, shifting from dullness to nonsense and back again. David Haye and his billionaire buddy Joe Fournier took it easy on one another in a sparring session brought to pay-per-view as an actually sanctioned pro fight. Jono Carroll decisioned Andy Vences in the only “for real” boxing match between two active, ranked boxers of the evening. In the co-feature, Anderson Silva laid out Tito Ortiz in the first round in a predictable starching. And, in between all that junk, fans got some musical filler that, like every bit of musical filler in these celebrity/legend “events,” was complete and total “make a sandwich or take a piss” time.

The only good in this evening of awfulness was 9-year-old D’corey Johnson’s nailing of the national anthem before the main event. Oh yeah, and Silva laying out the genuinely repugnant Ortiz was pretty sweet, too. Hopefully, Ortiz stays out of the public eye now and goes back to his out-of-ring life of being a MAGA-loving caveman misanthrope and alleged unemployment scammer.

All in all, one can only hope that not too many people invested $50 into what was destined to be a disgraceful and denigrating night for the sport.

As those who read my work know, I have zero problem with celebrity boxing events and legends exhibitions. There’s room for all kinds of boxing-- the real and the fluff. But this was something else altogether. Something like Fight Club Legends 2, which altered the fundamental rules of the game (with 2-minute rounds in male bouts) and flagrantly disrespected a legend, DOES hurt the sport.

Hopefully, the real, active fighters Triller has been hoping to attract look beyond the quick-cash offers and see what we all saw on Saturday. These guys are no friends of boxing. Triller is a mean-spirited pimp looking for fighters to exploit and they really don’t give a damn about the fans, the athletes, or even the product itself.