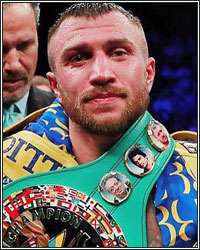 We got lots of action this past Saturday, none of it particularly earth-rattling, but some noteworthy stuff nonetheless. So, let me share with you my takeaways from a busy day of boxing, Quick (S)hits style:

Vasiliy Lomachenko vs. Richard Commey: I guess all the usual adjectives are going to be used in a post-Lomachenko fight write-up. “Masterful” is probably the most prevalent descriptive word used for the former 3-division world champ’s showings and, well, it’s usually hard to argue with that. On Saturday, Lomachenko did look masterful against a Richard Commey who is good, but is clearly not a true elite. Despite all the “4 Kings” talk and the rise in prominence of George Kambosos, there’s a case to be made that the former unified lightweight champ from the Ukraine is still the best lightweight in the world. Teofimo Lopez’s loss to Kambosos a couple weeks ago, plus the fact that Lopez barely held on to beat an apparently injured Lomachenko back in October of 2020, lend credence to the idea that Loma, at the very least, still deserves “1b” placement at the top. It’s going to be interesting to see his path to getting a chance to make it to “1a” status again. The other top lightweights have to know that he’s still the same fighter who was Mr. Everything just 18 months ago and that he looks to not have slowed down one bit since then. If Arum and ESPN can dump an insane load of cash on Team Kambosos and travel down to Australia for the fight, that would be Loma’s quickest route back to the top. But they better be prepared to lose money on this deal to get him there. I think he beats Kambosos handily because, despite the feel-good, whirlwind love affair with the plucky underdog, I still don’t think he’s THAT good. Tough, disciplined, bad-ass? Yes. But, “beating Lomachenko” good? Nope. Btw, THE fight to make at 135? Lomachenko vs. Tank Davis. Period. But don’t expect that one to ever happen.

Nonito Donaire vs. Reymart Gaballo: Donaire punched his ticket to the Hall of Fame a long time ago, years before punching fellow Filipino Gaballo in the liver with a nasty left hook to score a fourth round KO on Saturday. The only fight I want to see for the 39-year-old Donaire is the Inoue rematch. Make that fight happen next and 2022 will get a head start on being fucking awesome.

Conor Benn vs. Chris Algieri: There’s no doubt that Conor Benn is a physical presence in the ring. And, of course, his last name gets him lots of clout in the UK. But, developmentally, he’s slightly behind the curve for a 25-year-old prospect. His sheer physicality, though, is enough to keep him on the main stage, getting chances to mature as he builds his profile. On Saturday, he proved that he could pulverize a 37-year-old full-time nutritionist, part-time broadcaster, semi-retired former world champ who’s only had one fight since June of 2019. Not to be too hard on Chris Algieri-- the guy IS a former world champ and has been in the ring with guys like Manny Pacquiao, Errol Spence, and Amir Khan-- but he was in no position to win on Saturday. He was 100% sacrificial lamb. Benn is talented and deserves to be ranked among top welterweight prospects, but he’s a full step-and-a-half behind fellow 147 lb. prospects like Jaron Ennis and Vergil Ortiz Jr.

Cody Crowley vs. Kudratillo Abdukakhorov: And, speaking of a full step-and-a-half behind...Crowley-Abdukakhorov turned out to be a good fight (very good matchmaking, btw), but if this was your first time seeing either guy, it became clear sometime around the end of the first round that Errol Spence and Terence Crawford have nothing to worry about at the top of 147. Crowley took the win via unanimous decision and, presumably, Abdukakhorov’ standing as no. 1 contender to Errol Spence’s IBF title. Let’s see if he has better luck at landing a Spence fight than Abdukakhorov, who had been no. 1 contender for over two years to no avail.

Dmitry Bivol vs. Umar Salamov: Zzzzzzzzzzzzzzz. Yeah, I wasn’t going to tune into this one on a Saturday morning. And, from reports, I didn’t miss much. Bivol has been a mega-bore ever since gatekeeper Isaac Chilemba numbed him over twelve rounds in 2018 and shut down the Raging Russian Killer hype in which he was being marinated. Who knows what switch got flipped after that Chilemba fight, but the man’s lost a lot of spark and, I’m sorry, he does nothing for me. At this point, Bivol’s just a competent world class fighter who is not really firing on all cylinders anymore. I’ll eventually track down and watch Bivol UD Salamov, but I’m in no rush.

Jared Anderson vs. Oleksandr Teslenko: I’ve said this over and over again, but, for me, Anderson is the best heavyweight prospect in the business, by far. He’s got size at 6-foot-4 and about 240 lbs. He’s got athleticism and very good hand speed, as well as one-punch power in both hands. He’s also 22 and is being matured in the sport as he matures as an athlete. He’s not some 30-year-old ex-football player who just put on the gloves a few months prior to making his pro debut. Yeah, Teslenko is a bit of a stiff and, up until now, Anderson has been matched carefully like most 11-fight young pros, but he certainly passes all eye tests. He’s also developing some color and personality, something which will pay dividends when it comes to his long-term marketability. Who doesn’t pay attention to a fighter walking to the ring with a faux-fur outfit, pimp hat, and cane?

There was some other stuff that happened on Saturday, too. Brandun Lee impressed again, stopping Juan Heraldez in 7 on the Donaire-Gaballo undercard. Muhammad Ali’s grandson, Nico Ali Walsh, got touched up a bit by Reyes Sanchez en route to a 4-round majority decision win. Olympic silver medalist Keyshawn Davis scored a TKO 2 victory on the Lomachenko-Commey undercard.

I ain’t going deeper than all that. Even a true boxing head has his limits. It was a good boxing day, though. And no controversies!