WHAT IF... FLOYD MAYWEATHER HAD FOUGHT MANNY PACQUIAO IN 2010? 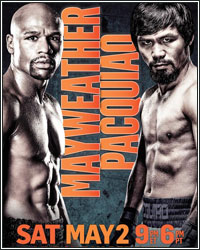 Inspired by the Marvel/Disney Plus series “What If” and as a tribute to the old school comic that inspired it, here’s a bit of “What If-ism” pointed at the boxing world. Agree, disagree, hurl personal insults in the comment section below.

Back in 2009-2010, the boxing world was dominated by Mayweather vs. Pacquiao talk. At the time, both fighters had made a good case for themselves as the pound-for-pound best in the world and both had firmly established their presence as cash cows in the boxing business. Both were even competing in the same division at the same time.

Yet, despite the clear logic involved in making this fight happen, it DIDN’T.

Bogged down in conflicting business ties and absolutely dead-ended by Mayweather’s request for Olympic-style drug testing, forward movement on making this fight happen completely stopped. Then, the finger pointing began, fans took sides, and everything became a hot mess-- until five years later when egos subsided and business logic prevailed to put together what would be the most lucrative fight in boxing history.

Mayweather would defeat Pacquiao via unanimous decision in 2015, earning ultimate bragging rights and multi-generational wealth in the process. Critics, however, would dismiss the fight as less than what it could’ve been had it happened five years prior, when both fighters were in their absolute primes.

But What If Mayweather and Pacquiao had fought back when it made the most competitive sense for them to fight, in 2010? Here’s a look at the alternate universe where the “Fight of the Century” took place when most people felt it should:

Coming off back-to-back-to-back weight-jumping demolitions of Oscar De La Hoya, Ricky Hatton, and Miguel Cotto, Manny Pacquiao was a ball of frenetic energy. Those not regarding him as the pound-for-pound best fighter in the world, had to acknowledge his status as the best offensive fighter in the game.

Mayweather, meanwhile, had been in early retirement for much of Pacquiao’s ascent from super featherweight to the higher divisions. He would come back in 2009, though, to dominate Juan Manuel Marquez in an “I’m back” statement-making performance. Those not regarding him at the time as the pound-for-pound best fighter in the world, had to acknowledge his status as the best defensive fighter in the game.

Given the incredible amount of money on the table and the massive amount of pride pushing the rivalry, both fighters come to terms fairly quickly. An early roadblock on random blood testing is averted when Pacquiao promoter Bob Arum and Mayweather adviser Al Haymon meet in marathon face-to-face negotiations and the fighters are presented with an agreeable compromise. Random testing will take place right up until 5 days before the fight, with urine testing allowed right up until fight night.

Now, the fight is ON.

The lead-up to Mayweather-Pacquiao is predictably insane. The “was Pacquiao dirty in his last few fights” narrative is pushed aggressively by Mayweather and his team and it makes the usually affable and even-tempered Filipino icon uncharacteristically irate and volatile throughout the build-up to the event.

After a headline-grabbing brawl between both teams at the weigh-in, Pacquiao issues a terse, mean-spirited warning to his rival.

“This is not boxing anymore,” Pacquiao tells the assembled media after both sides are separated. “I’m going to hurt him for bringing dishonor to me, to my family, and to the Filipino people.”

The big fight buzz is crazy before the opening bell. In a rare instance of the mainstream world coming back to the boxing world, Mayweather-Pacquiao brings main page attention from all the “legit” media, from ESPN to People Magazine. Everyone is glued to their TVs, waiting on this unbelievably acrimonious rivalry to detonate into a fight.

Once the bell rings, Pacquiao explodes with anxious, anger-driven energy-- and drops the defensive master, hard, in the opening moments of the fight. Mayweather looks to be on unsteady legs, but manages to weather the storm, using his high ring IQ to tie up and nullify his opponent’s offensive surge.

After a still-shaky, cautious second round, Mayweather is working with a clear head by the third and starting to figure out the hard-charging offensive master in front of him.

By the fifth round, he’s starting to time Pacquiao and get more space for himself with quick potshot right hands and the occasional check hook. Pacquiao is becoming increasingly unsure of himself and his aggression is now tempered with caution.

By the ninth round, Mayweather is doing what he wants. He’s moving and potshotting and tying up when Pacquiao manages to get into a position to throw punches. By the tenth, Pacquiao’s offense is limited to the occasional big-swing, Hail Mary bomb in hopes of turning the tide of the fight.

Despite a big shot landed at the end of the eleventh that seems to wobble Mayweather’s legs a bit, Pacquiao gets virtually nothing done in the championship rounds.

Following the fight, Mayweather again announces his retirement from the sport. This time it lasts three years, until he comes back to beat Andre Berto and the young Canelo Alvarez in 2013. Following these two victories, he retires for good.

Pacquiao stays out of boxing for a good year-and-half, until he returns to beat Juan Manuel Marquez by yet another close, controversial decision. In his next bout, he beats Brandon Rios for the vacant WBA welterweight title and holds the belt for two defenses until being decisioned by a young, upwardly-mobile Keith Thurman.