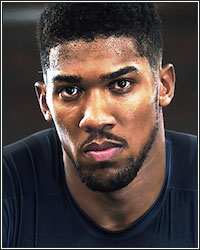 Teofimo and AJ: The Comebacks

Am I too hard on Teofimo or did he do what he was supposed to do? Pedro Campa was selected because there was nothing spectacular about him, but he had a decent record. One thing I don’t like about fighters nowadays is that they follow this Mayweather-esque style where they circle the ring almost all the fight and potshot with powershots...that being said, even though 140 is loaded with lots of talent, I see Teofimo taking over this division as he is the most talented and has what it takes to beat most guys.

P.S. I feel this weekend is going to end badly for Anthony Joshua, but my fight fan optimism hopes for that killer instinct to be back to make it entertaining.

I’m gonna be lazy here and just post what I wrote in Monday’s Notes from the Boxing Underground column:

“Top Rank is the absolute best at safe matchmaking that appears dangerous and their choice of Campa as Teo’s comeback opponent was superb. The native of Hermosillo, Sonora was tough, game, and flung his fists like he COULD do some real damage. But, really, he never had a chance. He was just too slow-footed, too slow-fisted, and too all-around pedestrian for a fighter in Lopez who is special in several ways…

…Lopez IS back and he looked pretty good, albeit against someone chosen to make him look pretty good. And, although his post-fight celebrations gave off an almost desperate “look at me being BACK and totally mentally healthy, not at all damaged” vibe, it’s true that even a Teofimo Lopez running at 75%, and wading in delusion is better than almost anyone else in his weight range.”

We’re right about this. Teofimo was matched in a way to make him look good and, to his credit, he DID. I’m fine with this relative softball after a rough 2021 and first half of 2022. And, yeah, I think he’ll do well at 140, if he keeps his head together.

I think that “potshot mentality” you mention happens when fighters are matched too lightly. They can be careless and load up on shots because they don’t fear or respect what’s in front of them. Mayweather did it because he was so much better than the opposition he faced, not so much because he was matched lightly. These other guys who do this, for the most part, are just playing with their opponents, like an NBA star fooling around, clowning around, juking an overmatched gym baller out of his shoes in a one-on-one.

As for Joshua– I think he could very well win this Saturday. I don’t think he lost to Usyk by a whole lot in the first fight and the difference between winning and losing could come down to something as simple as using his jab more. I don’t think Joshua has a killer instinct and the way he cheerily accepted defeat in both of his losses seems to support my view. His one “hot” performance against Klitschko was, likely, a one and done thing. He does have a big punch, though, and that will always be a factor against, well, anyone, but especially against a small heavyweight like Usyk. Gun to head, I’m picking AJ to beat Usyk this Saturday, but not via some fiery drive for vengeance.

For the life of me, I can’t figure out why you’re so negative on Anthony Joshua. Maybe you’re jealous. Maybe when he KOs Oleksandr Usyk this weekend, you’ll be forced to change your tune. Whatever. This vendetta you have against AJ is sad and pathetic.

Now, why in the world would I be jealous of Anthony Joshua? How would that make any sense? Am I jealous of his physique…his money…his snorkel buddy relationship with Eddie Hearn? If I hated on fighters for those reasons, I’d be hating on almost everyone in boxing (although Eddie Hearn snorkel buddies are few and far between). I don’t even “hate” the guy. People really need to start understanding that being honestly critical of someone is not “hating” on them, it’s simply telling inconvenient, uncomfortable truths– something which all of us in the media should be doing.

I just don’t think Joshua has “it.” What he’s delivered in his career thus far has fallen well short of the hype slathered on him as he came up, touted as the next “King of Boxing.” Sorry if the truth hurts. If he goes on a tear and destroys Usyk, Tyson Fury, Joe Joyce, Deontay Wilder, and a half-dozen other top heavyweights, I’ll admit I was wrong. I have no problem admitting when I’m wrong. But, as of right now, I’m right and the cuckold vibe he gave off in defeat– both times– told a lot about the fire that’s (not) burning inside.

Like I said above, I think Joshua will beat Usyk this Saturday, but that will have more to do with the realities of both fighters’ physical presence than Joshua’s burning desire for revenge. I don’t think AJ has “it” in him– “it” being that intangible warrior soul force that guys like Ali, Holyfield, Louis, and even Tyson Fury had. Again, sorry if that hurts your feelings.

What’s up with Spence-Crawford?

What's going on with the Spence and Crawford fight? It's either they're at a dead end or they're diligently negotiating. Supposedly, the fight was supposed to happen in late October or early November. If they don't announce a deal by the end of this month, we're looking at late winter or early spring.

The conventional wisdom was that Spence was the A-side. He has more belts, a bigger box office draw and he's faced better opposition.  To my understanding Spence is trying to position himself to get a bigger share of the pie.

I myself believed that Spence was deserving of the A-side position and was entitled to a 60/40 split. As well as calling the shots regarding the location, gloves, ring size,  etc. However, after really analyzing the situation, Spence needs Crawford just as much as Crawford needs him. Which makes this a 50/50 fight. Crawford should be demanding that split. Because there's no possible way Spence can move forward in his career without the Crawford fight. It would be a travesty if Spence's next fight isn't against Crawford and vice versa.

I don't think Crawford is demanding the larger split. Crawford probably is demanding 50/50. As it should be, because Crawford is so important to Spence's legacy. Furthermore, if this fight doesn't happen next for Spence, this is a bad look on PBC. If PBC can't get Spence and Crawford in the ring, it's not going to look good. Crawford is not a PBC fighter, he's a free agent, but there should be no excuses as to why Spence v. Crawford isn't next.

I think it’s a very good sign that there are no back-and-forths going on via media or social media and no negotiating through the press. The fact that all parties have been quiet and respectful, to me, means that a deal is being hammered out and everyone’s been instructed to stay away from starting any potential fight-wrecking squabbles or misunderstandings.

All the buzz I’ve heard from industry-types has been positive and, right now, a mid-November date looks like the goal. But, of course, this is boxing and that could change in a heartbeat.

You’re right in that both sides really need each other and that there are very few commercially and competitively-viable alternatives available to either. This is because the fans, in unison, seem to be of the mind that Spence is the only opponent for Crawford and that Crawford is the only opponent for Spence. This is definitely a good thing. Plus, it doesn’t hurt that these guys really, really do want to fight one another.

The money split stuff can be worked out, especially if both are convinced that there will be enough money in the pot. The question is whether there WILL be, but that’s a topic for another day.