NOTES FROM THE BOXING UNDERGROUND: USYK-JOSHUA 2 (A NIGHT OF WHINE AND CRINGE) 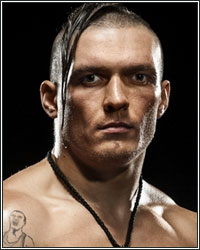 Oleksandr Usyk vs. Anthony Joshua 2 was a pretty “meh” fight until the ninth round. It got interesting from round nine to the end of the twelfth. Usyk was named the winner via split decision. Then, Usyk-Joshua 2 got REALLY interesting.

Post-decision, Joshua held up the Ring Magazine and WBA belts and tossed them out of the ring in protest. He then bolted, clearly pissed off, and was on his way back to the dressing room before he turned back around, re-entered the ring and asked for the mic. He would proceed to deliver the most cringe-worthy post-fight mic work since Mike Tyson’s “I broke my back...My back is broken...Spinal.”

“Usyk, one hell of a fucking fighter, let’s give him a round of applause. That’s just emotion...Look, if you knew my story, you would understand my passion,” Joshua told a somewhat befuddled crowd at the Jeddah Superdome in Jeddah, Saudi Arabia. “I ain’t no fucking amateur boxer from five years old that was an elite prospect from a youth. I was going to jail...I got bail and started training my ass off, because if I got sentenced, I wouldn’t be able to fight...

“The fucking passion we put into this shit, man. This guy, to beat me tonight, maybe I could have done better, but it shows the levels of hard work he must have put in, so please give him a round of applause as our heavyweight champion of the world. Woo! Motherfucker!

“I’m not a 12-round fighter. Look at me! I’m a new breed of heavyweights. All them heavyweights--  Mike Tyson, Sonny Liston, Jack Dempsey. ‘Oh, you don’t throw combinations like Rocky Marciano.’ ‘Cause I ain’t fucking’ 14 stone, that’s why! I’m 18 stone and I’m heavy! It’s hard work! This guy here is a phenomenal talent.

“...I was studying Ukraine and all the champions that have come from your amazing country. I ain’t never been there, but at the same time, what’s happening there is-- I don’t know what’s happening, but it’s not nice at the end of the day," Joshua added.

It was a bizarre moment and very much a scene-stealer from a clearly put-off Usyk, who deserved the spotlight all by himself. Joshua showing this much passion, though, AFTER the fight and not so much DURING the fight was a thing that many, many observers pointed out.

Promoter Eddie Hearn tried to smooth over the mess in his own post-fight interview, but it was a little like putting spackle over the San Andreas fault line.

“You saw the reaction from AJ and that was from a human who wanted to win so badly, with so much pressure on his shoulders,” Hearn said, “and I think he just exploded because he lost and he was devastated and he has given everything to try and win this fight...He’s a competitor. He’s a winner.”

Joshua’s fragile mental state would resurface during the post-fight press conference when he broke down in tears while trying to explain his disappointment in losing this bid to regain his three world title belts.

And speaking of fragile mental states, (still) WBC heavyweight champ Tyson Fury would immediately chime in via social media, blasting the efforts of both Joshua and Usyk and un-retiring for the second time in ten days.

“Both of them were shite!” Fury said via social media. “It was one of the worstest heavyweight title fights I have ever seen! It was bullshit! I would annihilate both of them on the same night. Fucking shite! Get your fucking checkbook out, because ‘The Gypsy King’ is here to stay forever!”

As for the fight, itself? As mentioned above, it was very good from the ninth round forward. Before that, it was a lot of Usyk doing his Usyk thing, bouncing around and touching at Joshua and Joshua being nowhere near as aggressive as he should’ve been, although he did fight a bit smarter and more focused than in their first encounter.

Honestly, Usyk has the type of frenetic style that will almost always get over on a Joshua who is lacking in fire, fluidity, and the ability to adjust on the fly. This fight was not a lost cause for “AJ,” though. There were some adjustments he could’ve made to flip a few rounds and take back the belts-- one as simple as sticking out his ramrod jab more often-- but the one-time future king of boxing is clearly not the fighter, or the man, he was hyped to be. Joshua simply couldn’t make the proper tweaks, couldn’t wrangle his mind into making the proper adjustments and, therefore, was out-hustled by Usyk...again.

Usyk has won the hearts and minds of boxing media everywhere, but he still has not definitively made his case as the top heavyweight or, even, as a legitimate, longterm-viable elite in the division. The Ukraine native’s heavyweight body of work consists of twice out-hustling a head-muddled, complacent Joshua, struggling twelve rounds with Derek Chisora, and stopping Chazz Witherspoon. It’s nothing to shit on, but it’s not yet the stuff of legend. A couple more wins over motivated top big men-- especially Tyson Fury-- will cement his spot as a “for real” heavyweight kingpin.

Joshua, meanwhile, will be back if he wants to be back. There’s still a lot of money pushing the AJ product and he’ll get as many second chances as tolerated by his UK base. But, make no mistake about it, he’s got some work to do-- mentally and stylistically-- if he wants to be a legit player on the main stage again and not just an “attraction.” At this point, and based on what the world saw on Saturday, he’s far from where he should be.

The big Brit also left a bad taste in a lot of mouths with his post-fight antics. As opposed to his other losses, where he gave off a distinct happy cuckold vibe in cheering on his victors, this time he kind of shit on Usyk and made the evening all about his own frustration and inner turmoil. Joshua tantrumed, then doubled back to the site of his tantrum, overcompensating for his outburst with cringey praise for Usyk and a lame attempt at justifying his loss by telling his side of things. Seriously, nobody but nobody is trying to hear that he can’t throw combinations like other heavyweight greats because he’s “heavy” and it’s “hard work.”

Like a good house party that ends with a raging, drunken husband-and-wife fight, everybody’s takeaway from Usyk-Joshua 2 will be the salacious, nutso drama at the end and not the party beforehand. That’s a shame for everyone, fans included.