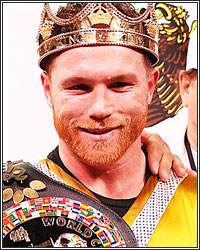 In this Thursday’s post-Canelo v. GGG 3 Sack, we got nothing but Canelo-related questions and comments. So, expect a touch of cinnamon with my salty load of wisdom this week.

First time writer, here. Devote reader, too. Thanks for sharing your good work with us week after week.

Let me bias myself, first. I’m a big Canelo (and GGG) fan. I don’t know if I can be objective. Having said that, I think you were a bit too harsh on them on your very good “notes from the underground” piece.

I’ll keep it very simple. In your last paragraph, you seem to hold against them the fact that there were never under life-and-death moments. I think that is a consequence of their greatness, not a result of their “mediocrity” as boxing stars.

Thanks for reading and taking the time to write.

You make an interesting point, but I’d lend more credence to your theory if both had fought more well-rounded, elite-level, prime talents. Golovkin, especially, has fought a succession of overmatched, tailor made opponents since, well, forever. The only true elite-level fighter on his resume is Canelo and he couldn’t beat him in three attempts. Alvarez has more depth on his resume, but true, prime elite-level foes are very few and far between over the course of his career. And the bouts he did have against elites were always cautious, close affairs where he either got beat (Mayweather, Bivol) or settled for safe points wins. If Canelo and GGG dominated their opposition and were that much better than almost everyone they faced, the black and white reality screams that it was because they were almost always facing fighters at least one full level beneath them.

Ultimately, though, it’s all a moot point. Whether they were too good for everyone or were pitted against inferior opposition, neither found the Barrera to their Morales or the Pacquiao to their Marquez. So, really, that prueba de fuego that forges great fighters into legends never came. When they faced off against one another, it shouldn’t have come as a surprise that neither had a next gear they could shift to.  And at this point of their careers, it’s highly unlikely that they will look for a defining war or win one if they encounter one.

P Mag. First, hope all is well with the you and the family. Second, I saw your piece on Gs age and the Notes from Boxing talking about Gs age. And no sooner than the Camelot/GGG fight was over, the safety blankets of "G was old" were thrown all over the place and the Canelo bashing ensued. Canelo was accused of aging G out. Even if he did go that route, G STILL signed the contract. When contracts are signed, ALL excuses go out the door for me. Old vs young leaves too many doors open for the young fighter not getting credit and the old guy getting blankets thrown under him. Your thoughts?

If lazy thinking were rocket fuel, the boxing media could launch themselves to Mars and back. Most of the people setting the narratives in this sport are either idiots who just don’t know what they’re watching or compromised fanboys trying to backdoor reality to make it fit their agendas. I still hold firm that Golovkin is a very fresh 40-year-old and I think we’ll see that if/when he fights again and crushes his usual level (soft touch) opponent.

And you’re 100% right. If someone signs the contract and walks through those ropes, there should be ZERO excuses.

Canelo-GGG was always going to be an unsatisfying mess, precisely because of the way the media and fans treat both fighters. Golovkin has always been coddled and Alvarez has always been hyper-scrutinized. Man-boys will always leap over one another to make excuses for why Golovkin didn’t look great and/or reasons why Alvarez didn’t look as good as you might think. It’s a good thing nobody with any boxing sense pays attention to those fools anyway.

A Perspective on the Canelo-GGG Scoring

Let's be real! Canelo faded away after round 7. Correct me if I'mm wrong, but this is how I viewed the fight.

I scored the fight  116-112 Canelo. I gave GGG rounds 8-11. If you look at rounds 9-11 it's hard to make a compelling argument that Canelo won any of those rounds. But rounds 1 and 8 was a toss up round that could've gone either way.

In reality, it's not far-fetched that a judge gave GGG 5 rounds and Canelo 7. I'm a huge Canelo fan and root for him everytime he fights. However,  going into round 12 in the back of my mind I'm thinking if Canelo doesn't win round 12. He's going to get a draw or lose the fight.

I know Canelo dominated the early part of the fight. But we can't ignore his disappearance in the late rounds.  I understand that round 1 is always a tossup. So regardless of what happens between rounds 2-7, if you don't dominate the championship rounds expect anything on the scorecards.

I had the fight a shutout going into the ninth, although it could’ve been 7-1 if I had been somewhat generous with the first round. After that, I had it three rounds to one for Golovkin, I believe. My score was 117-111, but I saw anything from 116-112 to 118-110 as acceptable. 115-113, for me, was a real stretch and something that required the judges to give Golovkin every benefit of every doubt in every marginally close round. I just don’t see it. But the right guy won. That’s something.