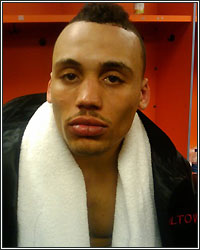 Jr. welterweights Vernon Paris and Tim Coleman made no bones about the hatred they had for each other prior to facing off in the main event of ESPN's Friday Night Fights. Yesterday, their weigh-in turned into a Royal Rumble which resulted in Coleman being kicked out of the Chumash Casino. Moments ago, the bad blood finally boiled over in the ring. Both men entered as prospects, but only one walked away as a legitimate contender in the 140-pound division.

After being knocked down in the 2nd round, 23-year-old Detroit native Vernon Paris came back strong and outboxed Tim Coleman, landing crisp combinations that began to take their toll. Paris then decided to work the body and the back-to-basics approach worked to perfection. After two knockdowns of Coleman in round 6, Paris finished off the Baltimore native at 0:27 into the 7th round, annnouncing his presence as a force to be reckoned with.