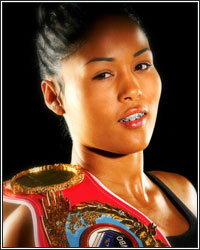 Imagine a person born in an environment surrounded by boxing.  Now imagine a person going against the grain to follow their dreams.  After a decade of hard work, imagine being crowned world champion only to be sidelined months later by a serious car accident.  Finally, imagine a person training through pain and ultimately defending and retaining their title. This is a sports story made for the big screen. Unfortunately for the main character, Kaliesha "Wild Wild" West, women's boxing has received very little attention until now. With the 2012 Summer Olympics right around the corner, women's boxing should begin to garner the respect it deserves.

From an early age, Kaliesha was exposed to boxing.  Her father, Juan West, who is also her trainer and manager, has been involved with boxing for nearly 30 years.  Juan started boxing at the age of 17 and was a member of an elite Navy All-Star Boxing team where he trained with Dick Pettigrew, Sean Fletcher, and Julian Wheeler. Juan also had a short, yet winning career as a professional fighter.  He believes the experiences and situations he dealt with personally as a fighter strengthen and help him as a manager.  It was Juan's involvement with training, fighting, and managing boxers which created the environment for Kaliesha's passion to grow.  However, when Kaliesha, at the age of ten, first came to her father wanting to box, Juan was hesitant.  He explains at that time, he "had the typical mentality of men.  Women don't fight."  Despite his reservations, he allowed Kaliesha to enter a boxing showcase, hoping it would discourage her from continuing.  Kaliesha's first fight was against a girl older and bigger than her, and by her father's accounts, "[Kaliesha] got her butt whooped."  Even while losing, she showed tremendous heart and immediately after insisted on a rematch.  From that moment, Juan knew she was a fighter and began her training.

Fourteen years later, World Champion WBO Bantamweight title holder Kaliesha "Wild Wild" West is ready to set the boxing world on fire.  An amateur career with over 100 fights has molded a fighter with the skills and experience needed to succeed as a professional.  When watching Kaliesha in action, you cannot help but be amazed by her range and versatility.  "I've always wanted to just get in there and brawl," she explains, but credits her father for grounding her with the technical skills of a pure boxer.  Four years into her professional career, Kaliesha has a winning record, world title, and is ranked at the top of her division.  The lack of U.S. competition has given Kaliesha the opportunity to travel internationally, competing against the world's best.  Her experience abroad has allowed her to see firsthand how women's boxing is received throughout the world.  After fighting in major bouts in places such as Denmark, Peru, and Mexico, it is clear that women world champions are revered throughout the world, unlike in the U.S.  In Peru, her team needed heightened security as soon as they arrived because of swarming fans.  In Europe, the fight received non-stop media coverage.  Internationally, boxing is boxing, regardless of gender.  "When it comes to what we want to do in life," as Kaliesha put it, "we are people."  Now is the perfect time for America to embrace women who box.

True boxing fans will not be let down by today's elite women boxers.  The battles between talented Ava Knight and Kaliesha West have the same energy of the Pacquiao vs. Marquez trilogy.  Melissa Hernandez, Layla McCarter, and Katie Taylor are all great fighters who should receive some well-deserved attention.  Last year, Ana Torres and Jackie Nava thrilled a reported 25 million viewers on Mexican television.  The Summer Games could be just what women boxing in America needs.

For the first time in Olympic history, women's boxing is a scheduled medal event.  However, in London 2012, women boxers will only compete in three divisions, Flyweight (48-51kg), Lightweight (57-60kg) and Middleweight (69-75kg), shrinking the pool of extremely skilled fighters at lower weights.  Nonetheless, both Kaliesha and Juan West are excited for their sport to have this great platform and are cheering for USA gold.  Both are great advocates for women's boxing.  "When one succeeds, we all succeed," says Kaliesha.

Look for Kaliesha to be back in the ring mid-February to early March in a title fight.  Team West also revealed they will be looking to move up in weight with hopes of becoming multi-divisional champions.  People already know about her skills and tenacity; now Team West will unleash her power.  Kaliesha, and her counterparts, truly box for the love of the sport.  More major networks and promoters need to showcase the sport so the world can see them for who they truly are...elite boxers.