KENDALL GROVE: "I HOPE HE TRIES TO KILL ME" 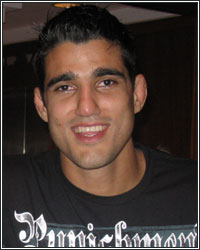 "Kendall Grove is dead! My next tattoo that I get on Sunday, I'm going to put 'In loving memoryof Kendall Grove' right down my right hand. That dude was killing me. He was pulling me down; he was too weak. He was helping everybody else and you have to help yourself before you could help anyone else. F*#k that guy. I'm back to being ruthless," stated UFC middleweight contender Kendall Grove as he talked about his upcoming clash with Evan Tanner. In this raw and uncut exclusive, Grove breaks down his prior performances and blah, blah, blah

PC: How was camp for this fight "Spyder"?

KG: It was good. I trained hard. I was back in Hilo training with BJ Penn. It was real good. I got to go back home and get in touch with the roots.

PC: How is your girl's pregnancy going?

KG: Good, good. She flew out to Vegas with me to watch the fight and in August, she gives birth.

PC: Congrats my man. You know what you're having?

PC: You gotta keep them out of the clear heels.

KG: Yeah, the clear heels. She'll be like, "Daddy, I want these for Christmas." Hell no! (Laughing)

PC: The "Spyder" has his back against the wall. You're fighting a UFC vet to get it off of the wall. How is your confidence coming into this fight?

KG: Honestly, a lot of people have been asking me that after seeing my last 2 fights and you know what? Kendall Grove is dead! My next tattoo that I get on Sunday, I'm going to put "In loving memoryof Kendall Grove" right down my right hand. That dude was killing me. He was pulling me down; he was too weak. He was helping everybody else and you have to help yourself before you could help anyone else. Fuck that guy. I'm back to being ruthless. It's a dog eat dog world and if guys want to step on me, I mean, fuck it. Like you said, right now, this is a back against the wall fight and I love to fight. I'm privileged to be here. I can't predict the future. Whatever happens on Saturday happens. I trained hard and hopefully he trained hard and we put on a good fight. If I get dropped, I get dropped. I'm just going to go out there and fight; that's all you can do. I'm just tired of putting that pressure on my own shoulders when I don't have to. If you talking shit about me and you haven't fought before, shut the fuck up and get the fuck out of my face, you know what I mean? That's just been the biggest thing I've been dealing with for the past fucking year really; it's haters and perpetrators trying to judge me from my last 2 fights.

PC: I tell fighters all of the time man, you can't worry about guys that fight behind a microphone or a keyboard.

KG: Oh yeah! My eyes are wide open now. Fuck 'em. If you're not in there, get the fuck out of my face. If you think you could do what I do, step up and I'll be the first one to shut you down.

PC: And one thing I respect is after each loss, you've never made excuses. Honestly, and you have to credit your opponents, but you've never had a chance to really get off. Do you think it's important to strike first in this fight?

KG: Yeah. I lost my last 2 fights. I fought Cote and I just believed the hype. I had everybody saying, "You were winning; you just got caught." I kind of believed it like I was kicking his ass and then got caught and then for the fight with Jorge, I put all of that pressure on myself. I was like, "I can't get hit in the head; I can't get hit." Basically, I brought my fight with Cote into that fight and I got hit and c'est la vie. I went down and fuck it. I'm just going to keep fighting. All I can do at the end of the day is go out there and fight. I have to have fun and remember why I fell in love with the sport.

PC: Do you feel like you were getting complacent and falling into that trap where it wasn't fun to you anymore?

KG: I can honestly say yeah, a little. I was running through guys; I felt unbeatable and I was doing good. I was on top of the world. I had a bunch of, what I like to call or "Mayhem" calls, "Yes Men" and they were making me believe all of that shit that they were saying and I lost sight of the game and why I fell in love with the sport. I was kind of doing it for the wrong reasons. I can honestly say I thought my shit didn't stink and thank God for Patrick Cote and Jorge Rivera. They brought me back on track. It's nothing like getting embarrassed on national TV and then coming back home to it and everybody that had your back are now looking at you different and don't want to hang out with you no more. I was like, "Whoa!" I'm happy that happened to me. I'm happy because I don't need those guys in my life. It brought me back to reality.

PC: Evan Tanner is a vet, like I said earlier. He has great ground game and good stand-up. What type of fight are you expecting out of the ol' timer?

KG: Pressure! He's going to be trying to get me down and mount me and use his elbows. If we're standing, him trying to get in range and clinch me and use elbows and knees. This guy has been fighting since before I even thought about fighting. I give him that respect because he's been in there with everybody, but this is a business. I respect him, I love watching him and I have the utmost respect for this guy, but come Saturday, I have to hate you. I gotta want to kill you and you gotta want to do the same. I hope he feels the same way. I hope he tries to kill me because I'm going to do the same and that's what makes for good fights. That's what makes great fights. All of the talk aside, you know what I mean, it's just trying to fight; let's go. I didn't fight my last fight so let's go; let's do it.

PC: Okami had a lot of success with his knees and his range. You have both tools in your arsenal. How much will you take from Okami's strategy?

KG: I seen he gets frustrated quick when Okami was using his range. Okami stayed calm no matter what and Okami fought his fight. He used his range and that's kind of how I have to fight him. I think my style is kind of like Okami, except for running, but patient, take your time and pick them apart. I seen an interview where Evan was like, "He doesn't like pressure," but that's what I've been working on. I've been having big guys on me, pressuring me the whole time and wrestling. They may not have been as great as Evan Tanner, but there is only going to be one Evan Tanner, just like there is only going to be one Randy Couture and Anderson Silva. We're going to find out who Evan Tanner is Saturday night, but I know my training is going to pay off and if not, fuck it. I'll live to fight another day.

PC: I like this attitude KG. It's your job and all, but you don't have to take it as serious as I think you were in our previous interviews before your last 2 fights.

KG: Nah, you know what I mean? I love this sport. I got a baby and a gym I'm opening up. I have 2 babies coming up. I can't revolve my whole life around 1 fight. This is what I love to do; it just so happens I get paid to do what I love to do. That's one thing that I noticed that I did in the past. I put all of that pressure on winning. Winning will come if you train hard enough, fight hard enough and stay true to yourself; winning will come. That's all that matters is if I go in there and have fun. The people that love me and have my back are still going to be there with me and the fake motherfucker's that's around, they aren't going to be there. That ain't no sweat off of my nut sack. A lot of people want to say, "Oh man, Kendall's attitude." No man, I just opened my eyes. A lot of people thought I didn't care about fighting in the UFC anymore. No, I love my job. I love fighting for the UFC, but I'm not going to put that pressure on myself where I have to win to keep my job. No, because when I start doing that, I lose sight of why I started doing this in the first place.

PC: I know you like to roll those Vegas dice. You're damn sure not getting an easy get-back-on-track fight. Is a win over a guy like Tanner what you need to get you back on track?

KG: With this win, it would just be good to have a win again and get my head back on straight. Evan is a tough guy and that's why I'm in this sport, to fight tough guys. I don't want to fight no-name guys that's never fought before or that have losing records. Here I am fighting Tanner, who at one point was one of the best middleweights in the world. I'm excited; I'm happy.

PC: KG, it's always good to catch up with you man. I hope to see you get back on track my man. Is there anything you want to say in closing?

KG: Thank you! Keep in touch Percy. You got my number.