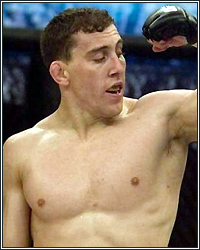 Despite being kicked out of The Ultimate Fighter Finale, it appears that Jesse Taylor is set to make his return to the UFC. Sources close to the situation have informed us that, less than one month after he was supposed to face Amir Sadollah in the finale, Taylor will be entering the Octagon on the July 19th card headlined by Anderson Silva vs. James Irvin. Although an opponent has yet to be named, it's rumored that CB Dolloway, who replaced Taylor in the finale and ultimately lost a second time to Sadollah via first round submission, could be the frontrunner to land the fight.

Although UFC President Dana White once said that Taylor did not possess the mental discipline to be a UFC fighter, apparently a couple of months is all it takes to develop the fortitude to deal with the pressures that being in the UFC can bring. "Go home, get your fucking life together, fucking call me in a few months," White would tell Taylor after informing him that he was out of the finale and the UFC. On July 19th, perhaps we'll see if Taylor has indeed got his life together or if he does become the "fucking lunatic" that White predicted he would turn into once he starts making money and becomes famous.