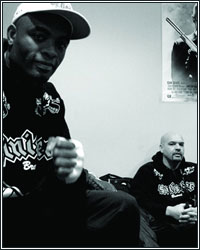 "Anderson felt like he broke him at the end of the 2nd round when he had him in the clinch kneeing him to the ribs....He was planning on finishing the fight in the 3rd round; that's what they trained for. They trained to feel him out for a round or two and try to take advantage of any opportunity. Patrick Cote was pretty good at not creating any opportunity for Anderson to capitalize on so Anderson started to enforce his game," stated Ed Soares, manager of UFC middleweight champion Anderson Silva, as he talked about the fight with Patrick Cote. You don't want to miss what else he had to say about Anderson Silva and his future plans, Junior Dos Santos, Antonio Noguiera, Lyoto Machida and much more. Check it out!

PC: Junior looked pretty sharp against Werdum. Where did he come from my man?

ES: Yeah! We believe he has all of the ingredients to be a true champion. He's definitely a work in progress. Werdum is a highly touted and very respectable fighter who has never been knocked out and Junior went in there and executed the gameplan properly and was able to land the uppercut, which is one of his best punches.

PC: I saw Dos Santos hitting the mitts on one of Dana's blogs and he looked to have some fast and heavy hands. Is the standup game his strong point?

ES: He's got great hands. He's very good on the ground too, but he's not the caliber of a Fabricio Werdum on the ground. I would definitely say overall that his strong point is his standup, but he's a very well-rounded fighter. He's young too man. He's only 24 years old so I don't think he's even got his man strength yet.

PC: It's been a lot of talk about Anderson's performance. What did you think about his fight with Cote?

ES: I could tell you that if Patrick Cote's knee wouldn't have went out in the 3rd round, we wouldn't even be talking about this. The gameplan was to feel him out. Everyone knows that Cote has heavy hands; even we knew that. He's got heavy hands so Anderson wasn't going to go in there and get into an exchange and try to land first. Hey, Patrick Cote has heavy hands and he could take a good shot. I don't think there is too many fighters out there that would have been able to take the shots that Patrick took from Anderson Silva and keep coming. That's the first story. Take your hat off to Patrick Cote; he could take a shot and that's proven. Anderson felt like he broke him at the end of the 2nd round when he had him in the clinch kneeing him to the ribs. He walked into the 3rd round telling his coaches, "I got him now. I broke him!" He was planning on finishing the fight in the 3rd round; that's what they trained for. They trained to feel him out for a round or two and try to take advantage of any opportunity. Patrick Cote was pretty good at not creating any opportunity for Anderson to capitalize on so Anderson started to enforce his game. He got him in the clinch and started kneeing him and after that round, Anderson felt like he had broke him. That's when he came out in the 3rd round and he was looking to finish him, but unfortunately, his knee dislocated. I could tell you if the fight would have went that 3rd round, I believe in my heart Anderson would have finished him and this wouldn't even be a topic.

PC: Do you think some fans and media as well put Anderson in a place to where if he doesn't destroy a guy in 1 or 2 rounds, then it's almost like a loss? Is that aggravating to you as his manager?

ES: It aggravates me a lot because he is only human. To this day, he has never taken a fight to a decision in the Octagon. This was the 1st fight that went to the 3rd round that he has had in the UFC. He's had such dominant performances that people just think he should just walk through people and if he doesn't finish them in the first or second round, then they say what they want to say. You can't control the media.

PC: It wasn't much different as far as his movement to me. I saw him do some of the same hand movement and lateral movement against Rich Franklin. People are saying he was showboating. Do you think people are just digging up stuff to say about him now?

PC: What next for Anderson?

ES: Well, Anderson still wants to fight the best. I like Patrick Cote as a person. He's a good dude and I like him, but him being a good person has nothing to do with...I just want to see him fight the best. I'll just leave it as that.

PC: EliteXC went under recently. You had some fighters in that organization so you obviously are affected. What happens to Rafael Feijao and Fabricio Cameos?

ES: Well, we're going to have to wait a few more weeks to see exactly what's going to happen with their contract situation with Pro Elite. Once we figure that out, we'll move on.

PC: What was your reaction when you heard the company went out of business?

ES: I was sad. I was bummed out, but nothing seems to surprise me anymore. You can't really hold your breath with anything now, especially with the country being the way it is with the economy and all of these different people. I sit there and I'm still a little bamboozled how Pro Elite went through 55 million dollars in 18 months. How do you go 55 million dollars in debt in a time where MMA is accepted? You look at the UFC and Zuffa. They went into a 40 million dollar debt in 3 to 4 years and they were fighting a completely uphill battle. It's really hard to say what people did right or did wrong and I'm not here to correct anybody, but I'm upset that the organization went out of business. It's a shame for all of the fighters out there and it's a shame for managers because that's just less options that we have, but maybe some of these organizations will pay closer attention to what the UFC is doing because they're obviously running their ship pretty tight.

PC: You still have Nogueira and Machida coming up. How are they looking in training and how do you like their matchups?

ES: I like both of their fights. You can't take anything away from either guy. First up is Frank Mir and how could you take anything away from the guy. He beat Tim Sylvia. He dominated Tim Sylvia and of course Sylvia was a different fighter, but so was Mir. He is a former heavyweight champion and you can't take him lightly, but I feel like it's going to be very hard to find a place where Mir is better than Nogueira. I think Nogueira is better on the ground and standing up so on paper, it has all of the signs for Nogueira to win this fight. But once again, a fight is a fight and I feel anything can happen, but I feel confident that Nogueira will win this fight. And as far as Lyoto and Thiago go, they're both 13-0 and there is no way you can become a 13-0 fighter and not be good. I think both of these guys have a lot to prove, but I like the way this fight matches up. I think it's a great fight for Lyoto. I know he's focused and training very hard for this fight and hopefully Thiago's back is healed and he'll be coming into this fight 100% and will be able to put on a fight the world wants to see.

PC: You put me onto Junior Dos Santos the last time we spoke, but he hadn't signed the contract with the UFC so we couldn't talk much about him. Is there anybody else you have coming up we should keep an eye out for?

ES: Well, first I will say we have quite a few fighters coming up. We have Paulo Filho coming up November 5th. We have 2 guys fighting on December 3rd. One guy's name is Diego Nunez. He's a 145 pounder, 13-0 and none of his fights have gotten out of the 1st round. He's a very tough guy and he will be making his WEC debut on December 3rd. We also have Will Ribeiro, who will be making his 2nd appearance in the WEC, and he's fighting a very tough guy in Brian Bowles and we're looking forward to having great fights on that card also. We have Rogerio Nogueira fighting November 1st in Japan for Sengoku. We have 2 of our guys that we're starting to bring up. One of them, his nickname is "Katel" and he's fighting on November 1st for an organization in New Mexico. We have another guy who is fighting on that same card named Fabio Maldonado. He's a very good standup guy and very exciting fighting in that small event. Everyone should keep their eyes and ears open for Andre Galvao who is a 7-time Jiu Jitsu champion. He's 1-0 in MMA and he will be making some noise in the 170-pound division really soon. I definitely think he will be a world champion in the future.

PC: Thanks Ed. I will definitely keep an eye out for them. Thanks for your time. It is much appreciated as always.