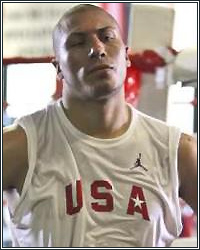 Olympian Shawn Estrada of East Los Angeles made quick work of his opponent in his pro debut, destroying Washington DC's Lawrence Jones at the 1:00 mark of the first round. Estrada landed a sharp combo in the first 10 seconds that sent Jones back into the ropes. He then proceeded to batter Jones to the canvas. Estrada will next see action on December 13th on the James Toney undercard.

Estrada was fighting with a heavy heart. His dream of turning pro was missing two father figures as Estrada's father passed away earlier this year during his Olympic run and his trainer, Rodrigo Mosquera, suffered a heart attack earlier in the day and was unable to attend the fight.