JOHNATHON BANKS STEPS UP TO THE PLATE 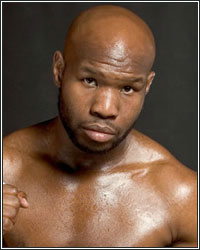 On February 27, at the Prudential Center in Newark, New Jersey, 26-year-old Johnathon Banks from Detroit, Michigan will be undertaking the toughest challenge of his short professional career when he challenges for the coveted IBF Cruiserweight World Championship title.

Banks' opponent on the night will be Jersey City's Polish ex-pat Tomasz "Goral" Adamek, who won the IBF title in December '08 by beating then champion, Philadelphia's Steve 'USS' Cunningham, by a close split decision. The fight had it all - excitement, drama and three knockdowns - and had been hailed by the media and fans alike as a "Fight of the Year" contender as well as the best cruiserweight battle of all time.

Banks' meteoric rise to championship challenger in just his fifth year as a professional prizefighter is a testament to his undoubted skill as well as his determination to succeed in the sport of boxing, even in the face of adversity

Banks, who credits his grandfather, Charles Edison, as his inspiration to become a fighter, took the first tentative steps to fulfill his dreams of becoming a boxing champion when, at the age of fourteen, he joined the Brewster Center gym. Within months, Banks began to accumulate championship titles, including the Michigan State Jr. Olympics, the State Silver Gloves and the Detroit Golden Gloves.

However, just one year later, Banks' dreams were shattered when he became the victim of a major car accident. The vehicle, in which he was the passenger, was hit and overturned at least three times. Banks suffered extensive bruising of his chest muscle, forcing him to take a two-year sabbatical from his beloved sport.

In 1999, Banks was finally able to return to training. Later that year, he was scheduled to fight at the Brewster Center, but after being told by Blue Lewis that women were not allowed in his gym, Banks simply responded, "if my mother can't come, I won't fight." Lewis was less than pleased, but Banks was adamant. This stance became a source of friction between Lewis and his charge; so much so that Banks had no option but to seek new facilities for his training. In early 2000, Banks joined Detroit's famous Kronk Boxing Team. Whenever he was asked why he chose Kronk, he simply replied, "Kronk is the place of champions!"

Banks made his professional debut on the July 30, 2004 at the Mohegan Sun in Connecticut, beating Deandre "Showtime" McCole from Akron, Ohio by a clear, unanimous decision. All three judges scored the bout 40-36 in his favour.

Not content to sit back and savour these victories, Banks was back in action again just 31 days later at the Grand Victoria Casino in Rising Sun, Indiana. His opponent this time was South Bend, Indiana's Carl Gathright. It looked like Banks may have secured his second knockout when he put Gathright down in the second round, but his plucky opponent got up off the canvas and gave it his all, in vain though as all three judges scored the fight 40-35, 40-35 & 39-36 in Banks' favour.

It wasn't long before his second knockout victory came though and when it did, it came quick. Just 31 seconds into the fight, Banks would floor Columbus, Ohio's Anterio "Bulldog" Vines at the DeCarlo's Convention Center in Warren, Michigan on January 28, 2005.

Four more first round knockouts followed in 2005 for the heavy hitting Banks. His next victim, Abdul Shabazz, lasted a little longer than Vines, but not by much as he lasted only 43 seconds. The defeat obviously proved too much for Shabazz as he has not fought since. Three months later, on the July 9, 2005, Raymond "Jose" McLamore stood his ground for a full two minutes and 28 seconds at the DeltaPlex in Grand Rapids, Michigan before Banks pulled the knockout punch out of his locker.

33 days later, Banks' opponent at the The Palace in Auburn Hills, Michigan was Cleveland, Ohio's Roosevelt Johnson, who lasted just 26 seconds before it was lights out. The Palace was also the location for Banks' final fight of 2005 when, on the November 4, he finished Miami, Florida's Joe Johnson in just 37 seconds.

2006 was another knockout year for Banks. First up, or should that be first down, was Milwaukee, Wisconsin's Mike Word at the Fisher Building in Detroit, Michigan. Word lasted one minute and 45 seconds. Next up was Sebastian Hill of Houston, Texas. Banks stopped Hill in the final seconds of the first round at the Joe Louis Arena in Detroit.

Next up for BAnks was a WBO NABO cruiserweight title shot against the current champ, the extremely tough Cuban Eliseo Castillo (20-1-1, 15KOs). Banks won the title after an exciting fight that saw him climb off the canvas twice in the first round to knockout Castillo in the fourth. Like Shabazz, after the devastating loss to Banks, Castillo has not fought again.

Banks' entire family was on hand to watch that first title fight, his first professional fight outside of Michigan. It had barely begun when they saw him go down. In a post-fight interview, Banks spoke of his thoughts on his first ever knockdown. "I was shocked. Mentally, I gave him his props, but I felt, 'Now it's my turn to see if you can take my thing.' I was more shocked after the fact. I was blown out of my mind. This dude knocked me down in front of my Mom. My family had driven from Detroit to New York and I'm on the canvas. My sister was crying, but I didn't panic. I just knew I had to get the guy. In that situation, whatever your true instinct is will show. If you're a coward ,it will show. If you're a fighter, you get up," Banks reflected.

"That fight increased my confidence," he continued. "I judge myself by the things I go through. You can't say you got heart until you're tested. After that fight, Tommy (Hearns) hugged me. He said, 'You did something I could never do. I couldn't get up and then knock the other guy out.' That meant a lot to me, Tommy saying that."

His final fight of 2006 was a rematch with Sebastian Hill at Bert's Warehouse Theater in Detroit on December 16. This time, Hill lasted a little longer as he was knocked out 41 seconds into the second round.

On January 25, 2007, Banks trekked across America to Nevada and at the Orleans Hotel & Casino in Las Vegas, he locked horns with Warren, Ohio's Zack Page for eight scintillating rounds. The judges scorecards at the end of the fight read 79-73, 79-73 & 78-74 all in favour of Banks.

Next, Europe beckoned and on March 10, 2007, Banks found himself flying across the Atlantic to the SAP-Arena in Mannheim, Germany for a date with hometown favorite Ralf Riemer. Unfortunately for Riemer, Banks was in a class of his own, emphatically stopping the German in just 32 seconds of the first round.

Two months later and back in America, Banks made his way from his Detroit home to the New Daisy Theater in Memphis, Tennessee to face former NABC Cruiserweight Champion Lloyd Bryan (22-16, 10KOs). The fight was stopped after what appeared to be an accidental headbutt in the third round that left Bryan bleeding badly and unable to continue. Banks had won both the first and second rounds and was ahead in the third at the time of the stoppage. He was declared the winner by technical knockout.

Another trip to Germany followed on July 7, 2007, where Banks successfully defended his WBO NABO title for the first time via a fourth round stoppage of Mexico's Gustavo "La Parka" Enriquez on the undercard of fellow Emanuel Steward trained Wladimir Klitschko's IBF/IBO Heavyweight title fight with Lamon Brewster.

For his next defense, on November 15, 2007, Banks was back home in Michigan to face Utica, New York's Derrick "D-Train" Brown. Although this fight went the full twelve rounds, the very tough Brown was totally outclassed by Banks as evidences by the judges scorecards of 118-108, 119-107 & 117-109.

In his first fight of 2008, on February 23, Banks faced the greatest challenge of his career by far when he faced heavy-hitting, former IBF Cruiserweight Champion Imamu Mayfield in a ten-round non-championship fight at the legendary Madison Square Garden in New York on the undercard of the Wladimir Klitschko vs. Sultan Ibragimov heavyweight unification bout. Banks was in top form that night, dropping the former champ twice. The second knockdown, a grazing right hand, left the former IBF champion flat on his back and out for the count. All this in just one minute and 49 seconds of the first round.

On July 12, 2008, Banks again flew back to Germany, this time to battle for the vacant IBO World Cruiserweight title against former IBF Inter-Continental champion, Italy's Vincenzo Rossitto, on the undercard of Wladimir Klitschko vs. Tony Thompson at the Color Line Arena in Hamburg, Germany. After twelve grueling rounds, the judges scorecards read a close 115-113, 114-114 and 117-114 as Banks was crowned the new IBO Cruiserweight World Champion by majority decision.

On December 6, 2008, Banks was due to fight Enzo "Big Mac" Maccarinelli of Wales for the vacant WBO Cruiserweight World title, but just five days before the fight, he was forced to pull out after injuring his ankle during training.

Outside the ring, Banks, a devout Christian, is a member of both the mass choir and usher board at Word of Truth Church. Banks says  that God's role in his life is "everything". When his boxing career comes to an end, he hopes to pursue a career as a lawyer.

Tomasz Adamek vs. Johnathon Banks for the IBF Cruiserweight Championship takes place on Friday, February 27, 2009 at the Prudential Center in Newark, New Jersey.

This event is promoted by Main Events and Ziggy Promotions, in association with K2 Promotions.