KING MO: "I WANTED THAT FIGHT WITH FEDOR" 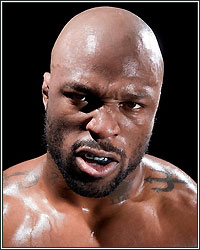 "I think I'm the best, but I'm not just going to go out there and badmouth everybody else. My time will come. I'm not going to downplay other people's skills. I will tell you how it goes. If I see somebody doing something wrong, I will tell youI will give my expertise, but I'm not going to badmouth nobody because I respect everybody that goes into the ring or cage and puts it on the line. Even if they are fighting on the smaller shows, I respect that," stated Muhammed "King Mo" Lawal as he talked about his upcoming clash with Don Frye and shared his thoughts on recent comments made by Quinton "Rampage" Jackson. Check it out!

PC: How is everything going bro?

PC: You just signed to fight Don Frye. Have you started training for that fight or do you pretty much stay in the gym?

ML: I kind of stay in the gym, but I just started breaking stuff down recently. I wanted that fight with Fedor, you know what I'm saying? I threw my name up in the mix, but we all know how that went down, so that won't be happening. I would've fought him at heavyweight. Someone gotta dethrone the Last Emperor.

PC: If you could have landed the Fedor fight on the 1st, would you be willing to turn around and fight Frye on the 28th still?

ML: Hell yeah! It ain't no question! If I would have got out of that fight injury-free, which I think I would have, I know I would have.

PC: How would you approach a fight with Fedor? How do you beat the unbeatable?

ML: I would just fight the way I normally fight. There is no one in MMA that fights the way I fight. I would just move, use my fakes and throw my punches. I would take him down and ground-and-pound him and watch out for the armbar. I would have to watch out for his 3, 2, 3 and 2, 3, 2 combo; that left hook, straight right followed by the left hook. Or he fakes the left hook, straight right, left hook. I would have to watch out for his power; just keep circling. Just keep moving because that's what it comes down to. The smaller guys give him more problems.

PC: Frye is a tough dude with a ton of experience. How do you plan on breaking him down?

ML: I think I pose a lot of different threats. I'm a better wrestler then he is first off. I'm better, quicker and faster and I look better. I'm just going to create mass confusion for him. I can stand with him, I can take him down and I could submit him. I haven't shown my submission skills yet because in Japan, them boys are well-versed in submission skills. My ground and pound is going to bewhatever I want to do to Don Frye, I feel like I can. I'm training hard for this fight because Don Frye is a tough man. I'm not going to take him lightly.

PC: You are still young in the sport, but you're obviously full of confidence. Do you think a lot of people confuse your swag as arrogance?

ML: I've always been confident, even in wrestling. I think people just have that ignorant effect. Just because you're confident, [it] don't mean you're cocky. Even if they are cocky, if they busting their ass and making the sacrifices, they deserve to be cocky because who else is doing that? I think people take it the wrong way. The fans can say what they want, but they ain't the ones getting punched, they ain't the ones getting their hands taped and they not training on the holidays and missing time with their families. They ain't the ones doing that! They the ones watching so they shouldn't even be saying much.

PC: Is the goal to eventually go to the UFC and test your skills there?

ML: I'm a free agent, so I'm looking into everything. I'm willing to fight wherever. I just want to fight somewhere that's going to keep me busy and pay me good, you know what I'm saying? In Japan, I fought four times on back-to-back shows. I don't know if that will fly in America. I like to stay busy though. I'm not feeling that fighting once or twice a year, you know?

PC: Everyone seems to believe the best at every weight division are in the UFC. Do you think you can compete with the best in the world?

ML: Yeah man. As a matter of fact, I practice with a lot of ex-UFC fighters. I've trained with Fabricio Werdum, Dean Lister, Benji Radach, The Nogueiras, Junior Dos Santos and ATT. I think I'm the best, but I'm not just going to go out there and badmouth everybody else. My time will come. I'm not going to downplay other people's skills. I will tell you how it goes. If I see somebody doing something wrong, I will tell you, "They wrestling ain't that good!" I will give my expertise, but I'm not going to badmouth nobody because I respect everybody that goes into the ring or cage and puts it on the line. Even if they are fighting on the smaller shows, I respect that.

PC: You have a ton of experience in the ring, but not so much inside of a cage. Would it be an issue for you to switch to fighting in a cage?

PC: In your last fight, you went the distance for the first time in your career. Is that something you felt you needed to do?

ML: The thing that people don't know is I fought with a torn ACL. My ACL was gone man. That's why I been out for 3 ½ months because I had ACL surgery and I did my rehab and everything back at home in Dallas. I ain't been broadcasting it so a lot of people don't know, but I broke my hand and I tore my ACL. I was still trying to get him out of there by slamming him. I had to find a way to win because I couldn't stand and trade with him because my knee was giving out. It's one point in the fight where I just fell down. I just fell down because my knee gave out.

PC: Thanks for your time bro. I don't want to hold you up. Any closing thoughts?

ML: Mayne, that Rampage shit, that ain't how that shit went down mayne. Rampage contradicts himself. First he said he didn't know who I was and then he said he always pulls for me in my fights until I fight him. He's not even funny anymore mayne. Every time Rampage makes a joke about black people, he talks about our features. He says things that someone in the Klan would say to us. When he made that "black on black crime" comment towards Rashad, I didn't see any black people laughing at that, but the white people was. They say, "Rampage is so cool and so funny." How is that funny? He then said it three or four times. It's a minstrel show.

Anyone that watched that video know he's lying about not knowing who I am. We met before that. But he shouldn't be worried about me. He should be worried about Rashad! My thing is the truth will come out and we will see how it makes us look. Memphis is a highly black-populated area. We'll see how many blacks show up to his fight.

I see people saying this is a publicity stunt. Let me tell you something man. I would rather be unknown and rich than broke and known. I don't care about being noticed. I want to get paid though when I fight. I want to be known as a good fighter. I don't want to be known as the person that got into it with Rampage. Rampage shouldn't care because he's already established. I'm not going to be disrespected though, saying he's better than me and greater than me and shit. I'm a competitor!