MIGUEL COTTO: "HE BETTER BE FOCUSED ON WHAT HE'S UP AGAINST" 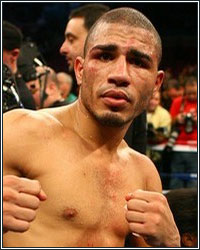 "If he thinks he's going to reach his 7th title in 7 different divisions, he picked the wrong moment, the wrong fighter and the wrong opponent...I know what I can do to him and he better be focused on what he's up against in Miguel Cotto," stated WBO welterweight champion Miguel Cotto as he shared his thoughts on Pacquiao's attempt to become the first fighter to win 7 title in 7 different division. Cotto held a conference call earlier today to discuss his higly anticipated clash with Manny Pacquiao on November 14th. Check out what else he had to say to the media in attendance.

On Freddie Roach's prediction of a 1st round knockout:

On Pacquiao's chance to become the first boxer to win 7 titles in 7 divisions:

"If he thinks he's going to reach his 7th title in 7 different divisions, he picked the wrong moment, the wrong fighter and the wrong opponent, you know?"

On his loss to Antonio Margarito:

"I'm pretty recovered from the Margarito defeat. I showed to the world in my last two victories. I don't have anything to say about that."

On what he took away from his fight with Joshua Clottey:

"I had a huge cut over my eye and a strong opponent in front of me and I was the winner of the fight, you know? I had to learn how to deal with huge problems inside of a fight."

On Pacquiao looking past him and discussing a Mayweather fight:

"You know what? What they say and what they do doesn't concern me. I know they know what they have in front of them. I know what I can do to him and he better be focused on what he's up against in Miguel Cotto."

"I really don't care what the boxing world wants to see or wants to do. Once I beat Manny Pacquiao on November 14th, they can continue their plans and they can do whatever they want, but I'm not going home without winning this fight."

"For my last fight, I spent more than 24 hours doing nothing; just waiting for the weigh-in...I'm going to make 145 no problem."

"Manny comes from a lower weight, lower division. If he thinks he's going to have the same power as Miguel Cotto, he's going to think pretty wrong."

On a possible fight with Floyd Mayweather:

"You never can force somebody to face you. I have to continue no matter who want to fight or who doesn't want to face Miguel Cotto. I'm here for the big names. I always face the hard opponents because that's what boxing needs...if that's a fight the fans want to see, I'm here."

On being a 3 to 1 underdog in the fight:

"I don't know anything about the betting business, you know...I'm going to the fight to beat Manny. If the people from the Philippines bet for Manny, it's alright for me. I'm here for myself, not for any kind of bet. The night of the 14th, nothing, not even the people who bet in favor of Manny Pacquiao, is going to change the result of this fight."

On the outcome of the fight: