EDDIE MUSTAFA MUHAMMAD: "THEY HAVEN'T SEEN THE BEST OF CHAD DAWSON YET" 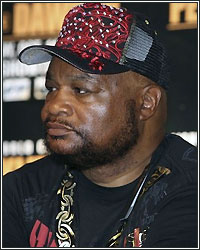 "I would like to see him fight Bernard Hopkins, but we all know that ain't going to ever happen. Every time someone brings up Chad Dawson to Bernard Hopkins, he brings up another subject. That will never happen...I respect everybody, all of the fighters and all of the fans, and they haven't seen the best of Chad Dawson yet. He still has a long way to go and they definitely haven't seen the best of him yet," stated world-class trainer Eddie Mustafa Muhammad as he talked about the future plans of Chad Dawson after his dominant win over Glen Johnson this past Saturday. Check it out!

EMM: Thank you very much.

PC: You have been telling me that he would do it way easier this time than the first. He did that. Did you see everything you wanted to see in the rematch from Chad?

PC: What did you feel the keys were to defeating Glen Johnson in a more convincing fashion?

EMM: The keys to beating Glen Johnson were to have Chad circle to his right. Alls Glen Johnson wanted to do was to use his right hand. He was right hand crazy, but he didn't hit anything. We kept moving in a tight circle and if we moved to the left, we made sure we were out of punching range. That's it; very simple.

PC: Chad said he wants Bernard next. There have been talks of him entering the 168-pound tournament, but what would you like to see him do next?

PC: Is it realistic that he could drop to 68 and compete in this tournament?

EMM: Yeah, he could make 68 with no problem.

PC: Speaking of the tournament, what do you think when you saw a fighter getting knocked out the way Jermain Taylor has been lately. What advice would you give him?

PC: What are your thoughts on the tournament overall?

PC: What did you think of his fight with Froch?

EMM: Froch made it a dirty fight, but everything with Froch is basic.

PC: How would you see Chad fairing in the tourney?

EMM: He would beat everybody without a problem.

PC: Was it ever a concern for you that it may be a distraction with him fighting in his hometown?

EMM: No, not at all. One thing about it is he is a real professional. I got him into a situation and to a point to where he is very professional in and out of the ring. We work hard. We put a gameplan together, he stuck to it and I gave Glen maybe 1 round. I don't know what the one judge was looking at, but it's neither here or there. We won the fight fair and square and going away. Chad did what I told him to do and we had no problem.

PC: Do you think it's a matter of Glen being done as a fighter or he was just up against too much in Chad? Do you think Glen can still be competitive against other fighters?

EMM: Oh yeah. We had a plan going into the ring and it took away everything Glen had. We took away his legs with the body shots and the right hand by half-stepping and moving side to side. He had nothing. We just broke him down.

PC: You said Marquez didn't stand a chance against Mayweather and you were correct. Do you think that solidifies Mayweather's pound-for-pound status again?

EMM: You have two pound-for-pound best fighters, Floyd Mayweather and Chad Dawson. Because of you look at it in retrospect, both of these are almost similar to each other. They both can make you miss and make you pay and they both can adapt to different styles of fighting. They can adapt; that's the main thing.

PC: I thought you were going to say they are both undefeated is the main thing.

EMM: There you go! That's what I'm talking about. So you have two best pound-for-pound fighters in the world.

PC: You came on record picking Cotto in our last interview. Are you sticking to that pick?

EMM: I think Cotto will pull it off. I can never count that man out. He is a real warrior and he's serious about his job.

PC: Would you like the Cotto/Pacquiao winner to fight Mayweather next?

EMM: Oh yeah. I would definitely like to see him fight the winner of Saturday's fight.

PC: I gotta ask you, what is it that you miss the most about fighting?

EMM: As a fighter, when I was in the ring, the only thing I miss was the referee counting to 10 (laughing). That's the part I miss. I used to ask them, "Can you count to 10?" If he says yes, then I will take care of the rest.

PC: Congrats again. It's always good to catch up with you. Is there anything you have in closing?