JOEY SPENCER PREDICTS CANELO VS. GOLOVKIN 3 FINAL OUTCOME TO RIVALRY: "REF WILL END UP STEPPING IN"

CLARESSA SHIELDS AS REAL AS IT GETS ON LAILA ALI; HOLDS NOTHING BACK ON SHOWDOWN COUNTDOWN

RICKY HATTON: "OSCAR AND ME PROBABLY HAVE THE BIGGEST FAN BASES" 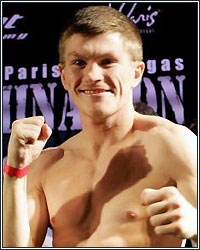 "I'm starting to get the itch again and in the new year, I'll have a serious think about things If it's not for a title, maybe at one of these catch-weights that seem to be a common theme in boxingI think Oscar and me probably have the biggest fan bases in boxing. Manny does have a wonderful following, but I think that would be one of the biggest grossing fights you could probably get at Wembley Stadium," stated former jr. welterweight king Ricky Hatton as he shared his thoughts on a possible return to the ring and much more. Check it out!

MJ: How is everything going?

RH: It's great. I had a good show on Friday for the Commonwealth title. It's been quite busy days.

MJ: How did you like that recent appearance on Monday Night Raw for WWE?

RH: It was fantastic. I was always a wrestling fan when I was a youngster and now my son Campbell is a massive wrestling fan. He got to see daddy doing that and meeting all the wrestlers; it was a very special night.

MJ: We've been hearing you may return to the ring. Is there any truth in this?

RH: Well, possibly. I've been busy with promoting fights, with my fighters doing very well. I'm starting to get the itch again and in the new year, I'll have a serious think about things.

MJ: When you start back to training, will you go back to Billy Graham or will it be a different trainer?

RH: I'd like to think 140, depending on whom I'd face. If it's not for a title, maybe at one of these catch-weights that seem to be a common theme in boxing. It all depends on whom you get matched with.

MJ: I've been hearing the names Amir Khan, Marquez and even De La Hoya. Are those possibilities?

RH: Well, they're all possibilities, but Amir Khan slightly because he's with Frank Warren, who is my former promoter, whom I've had obvious differences with. But they're all possibilities, because that's the level I want to go straight back into. I don't want to drop any levels. I've fought the top ten guys, obviously Pacquiao and Mayweather. Kostya Tszyu was number two when I beat him and Castillo was around nine or ten. That's the type of level where I want to be.

MJ: Speaking of Pacquiao and Mayweather, if they were to fight, who do you think will win?

RH: Before the Cotto fight, I would have said Mayweather; but I was blown away by Manny's performance. I didn't think he was capable of that; in fact, I had a sneaky feeling that Miguel could probably do it. But he just keeps looking better and better and stronger. I just wonder with Mayweather being such a master of defense and so hard to nail, but Pacquiao totally deserves to be ranked the number one pound-for-pound fighter in the world. He just seems to be getting better and better to me. Mayweather looked exceptional in his last fight. In fact, I think he could have stopped Marquez, but he's a safety-first fighter. As good as he is, he's a safety-first fighter. That's probably why he doesn't have the fan base. But he's an exceptional fighter and maybe I'd edge Mayweather ever so slightly.

MJ: Do you think they will ever be able to come to terms, knowing how they both negotiate?

RH: I think they'll be able to negotiate it. I mean, to be honest, if you're the best pound-for-pound fighter in the world and in an argument over who's the best pound-for-pound fighter in the world, then it's a fight they should both want and be able to make.  But it doesn't always come to be that way. Manny's looking bigger and bigger every time he fights, to be perfectly honest with you. I know Mayweather sometimes likes to fight the little guys like Marquez, who was a lightweight, and me, who was a light welterweight. With Manny moving up in weight, he might entice Floyd, because I know Floyd likes to fight the little fellows. That's the way it seems, anyway.

MJ: Will we ever get to see you fight in Wembley Stadium?

RH: I hope so. If I am going to fight again, I'm not going to have too many more. My dream would be to fight in Wembley. There's not been a fight at the new Wembley and I'd like to think that maybe I'm the only person who could sell it out, even after my defeat to Manny. I know I could sell it out, but it all depends on which opponent I fight. But this is something I'd like to do.

MJ: I think you and Oscar could be every bit as big as Floyd and Manny in the revenue department if you two were to fight in Wembley.

RH: Yeah, without a doubt, because I think Oscar and me probably have the biggest fan bases in boxing. Manny does have a wonderful following, but I think that would be one of the biggest grossing fights you could probably get at Wembley Stadium.

MJ: It's been amazing to watch your career progress and your following grow. How did you get such passionate fans? They're amazing!

RH: Number one, I think it's my style of fighting. Obviously, there are a lot of exciting fighters out there in world. I think it's because I've remained down-to-earth and a man of the people. I've been as much of an entertainer outside of the ring as inside, with the Ricky Fatton things and stuff like that. I think people generally see me not just as a British boxer, but as a real person, as their friend, if that makes any type of sense. For the ones that have met me, I've shook each one of their hands in many ways.

MJ: Where did the Ricky Hatton chant originate?

RH: It was a Christmas song and it was sung at a few football grounds and stuff like that. It's just everywhere I go now. If I walk in a park or a pub or a boxing show, it just starts, straight away. It seems to be the song that everyone has recognized me for and when I do decide to hang up the gloves for good, I'm not saying I'm going to be remembered as the greatest British boxer we've ever had, but I don't think there's ever been any that had the following with the best fans I could ever know.

MJ: What are your plans once you finish boxing?

RH: I'll be in promotion. I have a health and fitness center in Manchester. I have some nutrition shakes coming out in mind of the weight I seem to put on in between fights. Obviously, they've seen there was a market. A lot of people call me the slimmer of the year. I haven't made up my mind yet, but I'm setting the wheels in motion to do so.

MJ: It was great talking to you. Best of luck.

RH: It was nice to speak to you.