JOEY SPENCER PREDICTS CANELO VS. GOLOVKIN 3 FINAL OUTCOME TO RIVALRY: "REF WILL END UP STEPPING IN"

CLARESSA SHIELDS AS REAL AS IT GETS ON LAILA ALI; HOLDS NOTHING BACK ON SHOWDOWN COUNTDOWN

VARGAS BACK IN THE GYM WITH NEW TRAINER, FLOYD MAYWEATHER SR. 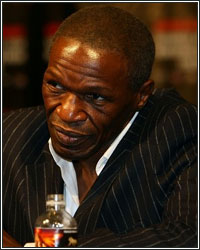 "He called me today and said he wants to make one more run," stated world-renowned trainer Floyd Mayweather Sr. who just informed FightHype.com that he will be training former jr. middleweight champion Fernando "El Feroz" Vargas. Vargas was last seen in the ring in November of 2007, dropping a majority decision to Nicaraguan slugger Ricardo Mayorga. That fight capped a 3-fight losing streak for Vargas, who hasn't tasted victory since a unanimous decision win over Javier Castillejo back in August of 2005.

Despite his numerous jabs at Vargas in poems leading up to his anticipated bout with Oscar De La Hoya in 2002, Mayweather said all is well between the two of them. "We talked about all of that man. Everything is good to go and we will see if we can get him on the right track. He knows how the build-up to fights can get ugly sometimes," he remarked.

Vargas, who recently promoted a card headlined by Joel Casamayor and Zab Judah, is now apparently ready to trade in his promoters cap for a pair of boxing gloves to make one more run in the sport. Vargas will have a long road in front of him to get back into fighting shape, but he and Mayweather had their first training session together today and we're told that all went well.