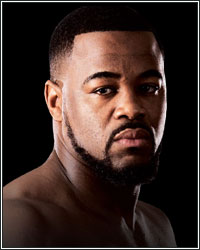 "Rampage gotta get in shape just to get in shape. He's in rough shape right now. He's been sitting on the set for a while, in the trailer, waiting to do scenes and getting served food and everything elseI think Rampage is ready to throw a curveball. I think it's time for him to implement something else into his gameplan. He's had some time off, so I know he's going to want to come out and be impressive. I think he's going to do something differently and try to throw me off. I wouldn't be surprised if you saw a little bit of the Rampage of old and he tries to go for one of his big slams," stated former UFC light heavyweight champion Rashad Evans as he talked about his highly-anticipated war with another former UFC light heavyweight champion, Quinton "Rampage" Jackson. Check it out!

PC: How have you been Shad?

RE: Man, I've been good. I have been quite busy since my fight, helping everybody train and watching a lot of fights, you know?

PC: No doubt. You were out in Australia for UFC 110. How was that trip for you?

RE: It was good man. The Australian crowd definitely brought it. They were pretty impressive. They are some big MMA fans and I didn't think it would be that big over there. We didn't have the success that we had hoped for over there as a team, but you have to fight through adversity and eventually, you will come out on top.

PC: I know it's tough for you to watch Keith Jardine keep getting beat in the fashion that he is. Do you think it's in his best interest to just take some time off?

RE: I think so. I think a little rest would be good for him. He's been catching some bad breaks and maybe if he takes a step back, he will see some of the things that need to be changed. It's one thing for me to see something and say, "Percy, you need to do this and that." It's a lot different if you see it. It's one thing for someone from the outside to say, "You need to change A, B and C," and it's another thing for me to see it myself and say, "This is what I need to change." So I think some time off will give him that perspective and he will see what he needs to do.

PC: We see more guys pull out of fights now. You guys pretty much train year round. If you're not preparing for a fight, you are helping someone else prepare. How do you avoid injury while doing this?

RE: I've just been lucky to avoid injuries. It's just one of those things that happens. I try to make sure that I try to stay healthy and take care of my body. I've just been very blessed to stay injury free.

PC: I saw you and Rampage bumped into each other in Australia. What was that face to face like?

RE: I felt like I ran into a long lost brother man (laughing). I haven't seen him in so long, we just picked up right where we left off. We got some unresolved issues and it was very evident when I seen him in Australia. He wasn't at a loss for words and I definitely wasn't either. He had a lot to get off of his chest and I did as well, so we just let each other know about it for a minute.

PC: You tweeted that we shouldn't be hard on Rampage's weight gain because he's pregnant with Tiki's kid. What type of process is he going to have to go through to bring his A game, because I'm sure you will be ready?

RE: He's in the UK right now training. He's doing a Forrest camp, so that's how fat he is. Rampage gotta get in shape just to get in shape. He's in rough shape right now. He's been sitting on the set for a while, in the trailer, waiting to do scenes and getting served food and everything else.

PC: You have been doing some acting yourself lately. How do you separate it and what is it like for you to be able to expand out in other avenues?

RE: Acting is fun because it's challenging. It's not as easy as it seems and that's what I like most about it is that it's very challenging. Because it is so challenging, it makes me want to strive to be good at it. I know my time right now is as a UFC fighter. When it becomes a time for me to transition and do something else, acting or doing something else, I should be able to transition pretty smoothly. I will be able to give my undivided attention to whatever it is that I want to do.

PC: When does serious camp start for Rampage and what's the process of switching gears from being an extra body for someone else to holding a hard camp for someone of Rampage's caliber?

RE: It's just about being a little bit more selfish and introspective on things that I need to do and things that I want to achieve in the fight. I got a little notepad where I write out things that would mean a good victory for me. I start from the end result. Just say, for instance, I want to win the fight and I want to win it this way. And then from there, it's kind of unraveling the gameplan by working myself backwards. That's how I decide what I want to do. So say if I say to myself, "You know what Rampage? I want to take you down 15 times." I see myself taking him down 15 times, catching him with a knee or whatever it may be. Then I go from there and say, "What is going to allow me to take him down 15 times? Does it mean I have to wrestle him or work my shots?" I unravel my gameplan from there.

PC: You have said in the past that Rampage has turned into a boxer that solely relies on his power. How beneficial is it for you to have guys in both Albuquerque and Colorado with great standup skills?

RE: I think it's very beneficial. Like you said, I have a lot of guys that have very good standup. I think Rampage is ready to throw a curveball. I think it's time for him to implement something else into his gameplan. He's had some time off, so I know he's going to want to come out and be impressive. I think he's going to do something differently and try to throw me off. I wouldn't be surprised if you saw a little bit of the Rampage of old and he tries to go for one of his big slams.

PC: I know you are a big Mayweather fan as well as Mosley fan. They are hooking up on May 1st. Who do you like in that fight?

RE: Ah man, that's a tough one man. It depends on how Sugar Shane goes in there and fights. If Shane goes in there and he's trying to be quicker than Floyd, I think Mayweather will outfinesse him, but I think if he goes in and fights like a cat like he does, with the quick reaction punches, and make it ugly at times, he has a chance to give Mayweather a scare. But my money is going to be on Mayweather man. I gotta go with the youth. The guy is a pure talent man.

PC: I'm sure we will speak often leading up to your fight against Rampage. Good luck in your preparations. Give me some closing thoughts my man?

RE: I just want to thank everybody for supporting the fight game right now. They are responsible for where I am right now and I thank you for that. Whether you like me or not, I got nothing but love for you.