MARGARITO ALL IN; GETS PACQUIAO ON FLOP AND GUARANTEED LICENSE ON RIVER 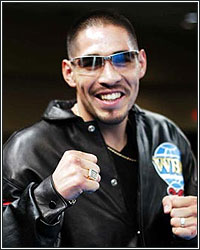 This time last year, Antonio Margarito was a disgraced fighter, serving a year-long suspension after being caught trying to use illegal handwraps prior to his clash with Shane Mosley. Now, he's on the verge of landing the equivalent of a Royal Flush in a game of Texas Hold'Em. A showdown with Manny Pacquiao, the best fighter on the planet, looms on the horizon and the only thing standing in the way is a boxing license in the United States. Evidently, that one key missing component is no longer an issue, as Margarito has been guaranteed a license in the state of Texas, despite the fact that he was denied by the Texas Athletic Commission just six months ago.

"A deal has been made, it's going to go to Dallas and [Margarito] has been assured a license in Dallas," a source revealed to Lem Satterfield of AOL FanHouse. Manny Pacquiao's adviser, Michael Koncz, would also confirm that a bout with Margarito would indeed move forward on November 13 at Cowboys Stadium. "Dallas is the final venue and we're very pleased about that," Koncz added.

Back in January, Margarito originally applied for a license in Texas for a potential clash with Carson Jones, which was set to take place in March on the undercard of Pacquiao vs. Clottey. That bout, however, was scrapped when the Texas Athletic Commission denied licensing Margarito in time for him to appear on the card. Granted, it was more of a "planned delay" than a flat out-denial, as the Commission simply procrastinated on making a decision after receiving enormous pressure from outside sources like the Association of Boxing Commissions, who made it clear that they felt Margarito should not receive his license based on the seriousness of his violation. As such, Margarito return to the ring was pushed back to May and he was forced to fight in Aguascalientes, Mexico.

Apparently, the Texas Atheltic Commission isn't receiving the same kind of pressure this time around, so they're prepared to move forward with granting Margarito his license, giving him the winning hand that will allow him to keep playing in this high stakes game of poker. All systems are go for the November 13 clash between Pacquiao and Margarito and the press tour is already tentatively scheduled to kick off on August 31 in Dallas, along with stops in Los Angeles and New York City.