BRYAN VERA: "FROM WHAT I HEARD, PAVLIK'S MANAGER DOESN'T WANT ANY PART OF ME" 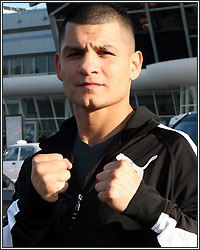 "We would love to take it...From what I heard, Pavlik's manager, Cameron Dunkin, doesn't want any part of me," stated middleweight Bryan Vera as he talked about his future plans after his big win over Sergio Mora this past Friday. Speaking to host Harley Burke, Vera talked more about the fight and much more on the FightHype radio show. Check it out!

On his victory over Sergio Mora...

"We tried to keep him on the outside and even when we got him on the ropes, we kept our distance a bit"

"This win definitley helps my confidence a lot."

"The goal is to keep improving and become a new fighter."

On his future plans...

"We're looking for a tune-up in March/April."

"We have similar stlyes; he comes to fight. I think it could be a Fight of the Year type fight."

On a potential fight with Pavlik...

"We would love to take it."

"From what I heard, Pavlik's manager, Cameron Dunkin, doesn't want any part of me."

"I'm gonna be a dangerous fight for any of these guys."