FLOYD MAYWEATHER: "I WANT THEM TO DO THEIR RESEARCH" 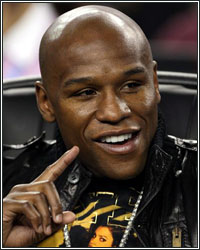 Regardless of what anyone thinks his motives may be for posting the links, it's clear that Mayweather does indeed have Manny Pacquiao on his mind from time to time. Perhaps a potential showdown between the two best fighters in the world will take place sooner than we all think...assuming Pacquiao has no problems getting past Mayweather's last opponent, "Sugar" Shane Mosley, on May 7. Of course, there's still that small issue of random blood testing leading all the way up until the bout.