ROGER MAYWEATHER: "PACQUIAO IS THE MAN BECAUSE IT AIN'T NOTHING OUT THERE" 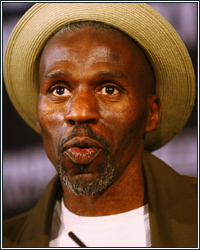 "Shane is there because that's a name that Floyd already beat, and since Floyd already done beat him, they just making it look like he's doing something by trying to fight a guy that's damaged already by my nephew...That fight ain't gonna prove nothing and that seems to be what boxing is about...It's all bullshit, but Pacquiao has the edge over them. Pacquiao is the man right now because Floyd hasn't fought since I don't know when. But Pacquiao is the man because it ain't nothing out there to draw against Pacquiao. The only one that can draw against him is my nephew," stated world-class trainer Roger Mayweather as he shared his thoughts on the May 7th showdown between pound-for-pound champion Manny Pacquiao and three-division world champion Shane Mosley. You don't want to miss what he had to say about the fight, his nephew Floyd Mayweather, Timothy Bradley, Miguel Cotto, Amir Khan and much, much more. Check it out!

PC: How is everything going Roger?

RM: Everything is good.

PC: Tim Coleman recently had to pull out of his fight with Vernon Paris. How is he doing now?

PC: I know you stay busy in the gym with your fighters. How are you holding up?

RM: Everything is well. I train a bunch of fighters. That's what I like to do, so I stay in the gym.

PC: I'm sure it occupies a lot of your time as well as keeps you in the loop.

RM: That's the only way for me.

PC: I wanted to get your thoughts on some upcoming fights. Who do you like in the fight between Miguel Cotto and Ricardo Mayorga and why?

RM: Well, I like Cotto as a fighter, but shit, I don't know how good Cotto is because Pacquiao whooped his ass. But everybody knows he [Pacquiao] got shit in him. They already got some shit on Shane. As soon as that fight was announced, they told Shane, "Look, you gotta take a test." Well, if Shane gotta take a test, then what the fuck you gonna do? You a fighter too, so both of y'all have to take a test. This motherfucker right here, you know, he got illegal shit in him. You ain't gotta tell me that. They need to test him fa sho.

PC: Do you think we will see Floyd in the ring in 2011, even if it's not against Manny Pacquiao?

PC: Switching gears to a fight that took place in January. What were your thoughts on the Timothy Bradley and Devon Alexander fight?

RM: Devon Alexander, that motherfucker gave up. He gave up. That boy [Bradley] was taxing his ass. Once he got cut, it was over anyway. Once the guy cut him, he act like he didn't want to fight.

PC: You're pretty much saying they don't make them like they used too.

RM: Hell no! Once he got cut, he act like he didn't want to fight. He used that as an excuse for him to quit. That's all that was. It wasn't about nothing else. You gotta do what you gotta do because that's a part of boxing. I realized in boxing, you got some good ones out there, but it ain't gonna never be...boxing ain't gonna never be like it was. Boxing ain't gonna ever be like it was because they don't have enough guys in the sport to show what they are made of. That's why it ain't never gonna be like it was. Now that my nephew has walked out of boxing for all of these months, I don't even watch boxing. I don't even watch boxing because when I look at boxing, I want to see a motherfucker with some skills and the ability to do something. I don't see it, so I don't want it.

PC: That's a huge statement coming from you because you are a historian of the sport and usually follow it pretty closely.

RM: I stopped watching boxing. People were like, "You gonna watch Timothy Bradley and Devon Alexander?" I said, "No, I'm not gonna watch them motherfuckers." I ended up watching it with my brother Jeff because I thought it would be a competitive fight, and then I ended up seeing a motherfucker just say, "Fuck it!" Devon Alexander coughed it up. Timothy Bradley had his number, that's all. Besides Timothy Bradley and a couple of other guys, I don't see nothing out there that is appealing in boxing. When I say appealing, to me, I mean when I turn my TV on, I want to say, "That motherfucker there can fight." I don't see that. If I don't see that, I don't watch it and I don't see that, so I don't even watch boxing. People talk about this guy and that guy. I don't give a fuck about all of that shit. I look for...it's just like Muhammad Ali was and that's why there is only one Muhammad Ali!

PC: You like to see someone with a major skill set for you to tune in?

PC: You don't give Freddie Roach any credit for the way Pacquiao has turned into a two-handed fighter, or just the way his stock has rose as a fighter over the past 3 to 4 years?

PC: So I take it you give Slim Robinson the credit for training Muhammad Ali over Angelo Dundee?

RM: Angelo Dundee sho in the fuck didn't train Muhammad Ali. Motherfuckers talk about Pacquiao is unbeatable and all of this shit. Who gives a fuck about that kind of talk when this motherfucker has been knocked out twice already? That motherfucker has been knocked out twice already and he won't take a test to prove he's clean and fight my nephew. It's a waste of time and that's why the fight never happened. But to answer your question, Angelo Dundee never trained Muhammad Ali. If he trained Muhammad Ali, that tells you one thing, Muhammad Ali never threw body punches. Now how the fuck you train somebody and they don't throw body punches. He ain't train no motherfucking Muhammad Ali and he didn't train Sugar Ray Leonard either. He telling these guys, "You blowing it, son, you're blowing it." What the fuck does that mean? Let me tell you, the two most skilled motherfuckers to ever become a boxer, I'm talking about skill-wise; Joe Louis is one and Sugar Ray Robinson is the other. I'm talking about pure skills about boxing. I'm talking about punching, measuring, and shit like that. They had the whole package. They are the two most skilled motherfuckers in boxing. A guy trained them two though. Ray Robinson was a great fighter anyway; he was 89-0 with 69 knockouts as an amateur. That tells you how good that motherfucker was and he won 7 world championships. Now they start talking about this guy and that guy. If Pacquiao wanted the fight, him and Floyd would have been fucking fought. Now he's fighting Shane Mosley, but I hear they first told Shane Mosley, "You gotta take a test." (Laughing) So if Shane Mosley gotta take a test, then what the fuck do you have to do? So Pacquiao ain't supposed to take a test, but Shane is? That don't even make sense. Shane is there because that's a name that Floyd already beat, and since Floyd already done beat him, they just making it look like he's doing something by trying to fight a guy that's damaged already by my nephew. Floyd beat the motherfucker when Shane took a test and Floyd took a test, and Shane got his ass whooped. Now Pacquiao ain't gonna take no test, but Shane Mosley may have to take a test, so how in the fuck is that fair? That fight ain't gonna prove nothing and that seems to be what boxing is about. If boxing gotta come down to a motherfucker taking a test and a motherfucker not taking a test, then you ain't fighting right anyway. It's all bullshit, but Pacquiao has the edge over them. Pacquiao is the man right now because Floyd hasn't fought since I don't know when. But Pacquiao is the man because it ain't nothing out there to draw against Pacquiao. The only one that can draw against him is my nephew. So when my nephew was going to fight the bitch, the bitch ain't want to take a test. What does that tell you?

PC: I appreciate your time. I hope to some day get the mega-fight that we all want between Lil Floyd and Pacquiao. Is there anything else you want to add to the interview?

RM: No man, just have a good one. No problem at all.