FLOYD MAYWEATHER EXPLAINS WHY HE BET ON TYSON FURY OVER KLITSHCHKO; LIKES FIGHT WITH DEONTAY WILDER

BOB ARUM REACTS TO CANELO VS. KHAN; SAYS KHAN JUST CASHING IN AND FIGHT NOT LIKE DE LA HOYA VS. PACQUIAO

FLOYD MAYWEATHER BACKS BEYONCE AND SUPER BOWL PERFORMANCE: "ANYONE ELSE, THEY WOULDN'T HAVE NOTHING TO SAY" 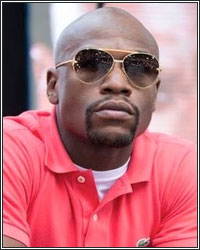 "I think Beyonce, I think she's a queen, she's a drop-dead gorgeous woman, she's a remarkable dancer, and she's at the pinnacle. If it was anyone else, they wouldn't have nothing to say. I will never criticize Beyonce," stated retired undefeated former pound-for-pound king Floyd Mayweather, who made it clear that he stands behind Beyonce following her Super Bowl 50 performance that received much scrutiny throughout this past week. As far as Mayweather is concerned, Beyonce is a strong role model for women to look up to and when she makes a statement like the one she made at the Super Bowl, people should take notice.

"I keep my fingers crossed that some day my daughters can be the next Beyonce; very powerful woman, very gorgeous woman, strong woman, not a good entertainer, a great entertainer, and she's going down as a legend. I'm never going to say anything about a woman that works harder than any other female in the music business. I will never do that. Absolutely not," Mayweather explained during a recent conversation with FightHype.com. "I mean, she go out there and, you know; me and Al Haymon, because I work with Al Haymon with different tours and of course I made a lot of money with different tours. Out of all the tours that Al Haymon has done since I've been involved with Al Haymon, by far, hands down, Beyonce, bar none, is the best. She always was at the fights supporting me. Even when all odds are stacked against me, she's there and she don't have to scream or cheer or go crazy and say, 'Floyd, I'm behind you.' Like I said, body language says it all, so I'm very appreciative for her support for so many years."

Mayweather added, "One thing about Beyonce, she's a real woman. Even like when you see on social media, you will never see no disrespectful photos. I mean, of course she's a beautiful woman. If you're sexy, it's okay to show it. She shows it in a classy way. She has a very beautiful daughter and she comes from a beautiful family. You know, her mother, I met her mother before and she comes from a strong mother and a strong father; sister very talented."

FLOYD MAYWEATHER SAYS HE COULD SHUT DOWN CANELO VS. KHAN BY FIGHTING DANNY GARCIA IN 50TH FIGHT